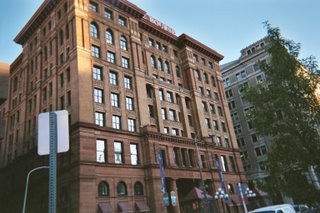 On Friday, Nov. 3, 2006 ABC 20-20 had a provocative two hour journalistic "movie" with John Stossel, much of it broadcast from the Phipps family Westbury Estate on Long Island, about the culture of privilege in America. Many issues were covered. These include nepotism, privileged treatment of schol athletes, racism (which can now go both ways), fame, and lookism, and particularly in the criminal justice system.

The racism component presented a man who looked completely Caucasian but who had one black parent, and who pass as "white" when his brother could not.

The lookism component showed nightclubs and bars denying admission to people based on "looks" (or the "halo effect"). That practice was shown in the movie 54 (1998), when the character played by Ryan Philippe waltzes in, past the bouncer, to Studio 54, shirtless with smooth chest and all. Even though I am 63, I have not run into this with gay disco clubs at all, although once a bouncer would not let me in to a small club in Minneapolis when he claimed that I was stumbling when I had not had any alcohol. Generally public accomodations in most cities may not legally discriminate this way, but it seems that the practice continues. I once berated a friend for suddenly gaining weight when I saw him at Pride, and he emailed me back that he was not pleased with my verbal comment, or with the "lookism" that infects the male gay community. "You should be more mature..."

What's disturbing is the "morality" of all of this. Family values seem, in the minds of many people, to justify privilege and nepotism, which is one reason that the nuclear family has lost moral credibility as a socializing institution. What seems to matter in a free society is how well each person can "play by the rules" of fairness, whatever they are.

There was a segment toward the end on fame and celebrity, which sometimes has an "expiration date." Indeed, the legal concept of "right of publicity" originally applied mostly to celebrities (and was a common law perk of earned "fame"). I can recall in 2002 getting into discussions with other callers in a phone bank about our society's idea of "meritocracy" and about "who is better" and whether or not this is really earned or deserved. There was a certain sentiment that often it is not, and there was a certain indignation against "rich people." Of course, remember that anger helped undergird Communism, in its most extreme forms like the Maoist Cultural Revolution of the 1960s; today China has a bizarre mixture of capitalism and a pretense of communism and "forced fairness" (?!?)