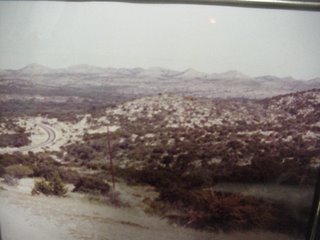 TLC presented the 1 hour documentary Area 51: Fact or Fiction, on Nov. 16, 2006. In 2000, I actually drove a rental car from Las Vegas the 200 miles around the horn to Rachel, Nevada and the Little Alien Inn. The documentary traces the efforts of a local to gain access to Area 51, about 30 miles of desert away from the Inn. He traveled to Denver to get satellite maps of the area, and found that the government and FBI got a search warrant to his mobile home. He says he didn't do anything illegal, and that he his being bullied or chilled off. The documentary showed various sensors on the land, and some UFO-like objects which could be top secret military aircraft.

I remember that trip. On a 1997 trip to Vegas, I had an ignition key break (that can really happen!) when another rental car was parked at Hoover Dam, and had to have the rental company come and rescue me.
Posted by Bill Boushka at 8:06 PM

trancemix07 said...
This comment has been removed by a blog administrator.
4:50 PM