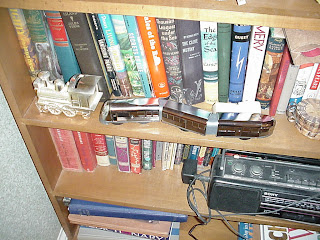 ABC News covered Asperger’s Syndrome today (April 4, 2007) on both World News Tonight and later on Nightline. Asperger’s Syndrome is considered to be a “milder” form of autism (or pervasive developmental disorders) although that characterization is misleading. The ABC story is here. WNT continued the topic on April 5.

The show presented two male students: an attractive 20-year-old in college, and a middle school kid age 12. Both reported being bullied, especially in middle school. The show characterized persons with Asperger’s as often highly verbal and intellectual but with poor physical coordination skills and often social non-reactivity, difficulty fitting in to common social situations and emotional distance as others view the person. The younger student had been placed in a structured program where he has supervised interactions from other volunteer students who do not have Asperger’s. Both persons were quite effective in speaking on television. Some weeks ago, an autistic (but successfully treated and educated) high school student who had helped his team win a basketball game appeared on national television, and that student was now amazingly poised when appearing in public.

A friend of mine, when I visited him in Rhode Island, told me instantly when we met for dinner that I had Asperger’s. Lack of body language, various speech patterns, etc. Probably true.

What is different is that someone like me can build a self-contained intellectual world. There are emotions, often related to ideas, art, music, and numbers (even chess openings), but they are hidden from other people in a way that reminds one of relativity in modern physics. The other observer sees someone who does not connect to or emphathize with others in a straightforward way.

The bullying is a “tribal” attempt by the “majority” to force those who are different to “conform” to their expectations, not only of competitive performance, but of ability to share common practical and social burdens. The bully may perceive the Asperger’s person as “malingering.” Until relatively recently, only more progressive school systems would implement programs to stop bullying, possibly because of a subliminal belief, even among many teachers and school administrators, that the Asperger’s patient exhibited a moral failure and should be brought into conformity and into “paying his dues” by other kids. So the “unusual” kid is placed in a very difficult position of being perceived as an “enemy.”

The WB series “Smallville” has developed the theme of a teenager who is “different” and must keep his difference secret, while having powers and abilities that are unusual and that would make “normal” people feel defensive.

There does not seem to be any clear connection between Asperger’s and sexual orientation, even though one can imagine theories that one expects to find a correlation. It does not really seem to work that way.

Oprah Winfrey continued the topic of autism on Thursday April 5 with an hour show on autism; here is her link with details.

On Good Friday April 6, ABC's "The View" (with Barbara Walters and Rosie O'Donnell) has a one hour segment "Autism Speaks" and interviewed several parents, and presented one ten-year-old kid who had largely come out of it. The show pointed out that in most states parents are entitled to free special education from the public school system, and early "ABA" behavioral treatment services. The mild end of PDD's leads to the "geek" personalities that gave us our computer revolution, said one older female person who had dealt with autism and now had a Ph D at the end. The web reference is here.

In February, CBS 60 Minutes had run a program about a connection between autism and special gifts; blogger link is here:

Here is the link to Zoli's Blog about Jason, the autistic teen who played a sensational basketball game for Athena High School, Greece NY.
Posted by Bill Boushka at 9:17 PM