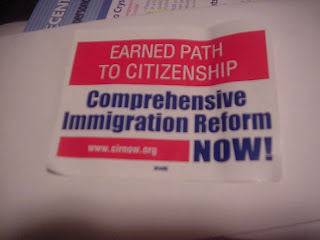 CNN today broadcast the Democratic Party debate from New Hampshire. Wolf Blitzer moderated, and enforced only informal courtesy rules in comparison to normal debate procedures. He even asked for a one-sentence opening statement like, “I am Wolf Blitzer from CNN.”

On Iraq, Sen. Clinton indicated that Congress was never given the ability to send inspectors back into Iraq to make sure that Saddam Hussein really had WMD’s. Remember Scott Ritter’s controversial 1999 film had cast doubt on whether they would be there. Sen. John Edwards gave Obama “credit” for voting against the second war in Iraq.

On health care, the candidates indicated that there had always been a lack of political will to force a universal health care program through. There was mention that Obama’s program was not quite universal. There was a general agreement to roll back tax cuts for those making over $250K a year to help pay for the coverage, which Edwards was particularly emphatic about.

Immigration was debated, and Bill Richardson criticized the “touchback” provision of the new proposal, and emphasized that he comes from a border state.

The most heated debate seemed to be over gays in the military and the controversial 1993 “don’t ask don’t tell” policy at the beginning of Bill Clinton’s term. Hillary Clinton characterized it as a “transition policy” which had often been miss-implemented by military commanders. Blitzer offered for a show of hands, and all the candidates indicated that DADT should be scrapped for a policy centered on (as Hillary said), “conduct,” which is what Bill Clinton had said in 1993. The loss of Arabic translators, and the tendency to discharge people when the need for combat was lower, were discussed. The idea of civil unions seemed to be supported, but not formal gay marriage. Aggressive hate crimes legislation and employment discrimination laws (probably covering other sensitive areas like teachers and of course security clearances) were supported.

A student from the audience, Tim O’Connor, asked about the possibility of the draft, and mentioned the draft in Germany where he had lived. The candidates supported the idea of strong carrots for national service, relieving student loan burdens and scandals, and supplying people for the Peace Corps, but especially storm reconstruction, eldercare, and especially tutoring disadvantaged (and probably special education) children.

Gov. Bill Richardson suggested that Bill Clinton become a peace envoy to the Middle East in a Democratic administration.

Kuchinich wants to end Nafta and go back to bilateral trade agreements.

Bringing the troops home and moving on health care seem to be the highest priorities, as well as education, and much better pay for teachers.
Posted by Bill Boushka at 5:58 PM