ABC 20-20 "The Fear and Fascination; CNN LKL: Dirty Jobs that Nobody Wants 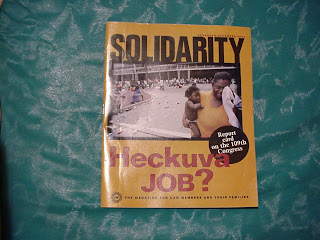 On Friday July 13 (Friday the Thirteenth) ABC 20-20 had a provocative broadcast “Hell: The Fear and Fascination” with Bill Weir.

It took a lot of material to fill the show, to challenge people who may have decided that they don’t believe in the usual Christian interpretations of the afterlife. Actually, there are multiple interpretations. The Vatican used to accept the idea of Limbo for babies who had not been baptized. And Purgatory is an unpleasant place where you “pay for” your sins. But most Protestant and certainly evangelical Christianity broadcasts the belief that anyone can go to heaven, regardless of his or her performance in life or sins, by accepting the fact that Jesus died for his sins, by accepting salvation by grace alone. It’s hard to reconcile that idea with the competitive idea of capitalism, and the Rosicrucian idea of karma (which could be connected to Purgatory if one wished) has made sense to me.

The show suggests that Hell had an inconspicuous beginning, with a certain ravine near Jerusalem as mentioned in a gospel verse as burning, but today that ravine is a verdant park. Satan supposedly originally worked for God, as his “attorney general”, prosecuting people for sin, before he Fell himself. The show went on to show one sadistic person serving consecutive life terms, showing no remorse, and demanding (like Seung-Hui Cho at Virginia Tech) that others experience and know his pain. The show presented another man who had a positive near-death experience at 12 when kids tried to hold him underwater as a prank. He became addicted to drugs and tried to achieve the afterlike by taking pills to commit suicide in Alaska. Instead he saw a glimpse of hell similar to the traditional idea, and came back to life. He claims that the place is real, and resembles the surface of the planet Venus.

On Saturday July 14 CNN Larry King Live had a show on “dirty jobs that nobody wants,” like cleaning septic tanks, moving manure, or collecting owl vomit. The idea that some of us depend on the unpleasant labor of others used to drive left-wing politics, and books like Barbara Ehrenreich’s Nickel and Dimed.
Posted by Bill Boushka at 8:02 PM