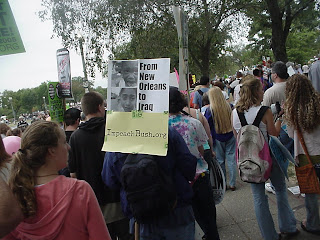 Michael Moore appeared twice on CNN very recently, including the 9 PM EDT Larry King Live show on July 10, 2007, where Michael Moore faced off against its own medical doctor-journalist Dr. Sanjay Gupta. The quibbled a bit about the facts in the film Sicko. Earlier, Michael Moore was questioned by Wolf Blitzer, and the interview can be viewed on CNN at this site. The Blitzer interview is here and runs about ten minutes (download time at high speed, about a minute). Michael Moore posted all of his own rebuttals on his own website.

Gupta claims that in Canada an “emergency” heart patient can wait six days for a cardiac catheterization, and several weeks in non-emergency. In the United States it is almost immediate in an emergency. Another procedure with wait times is hip replacement. Moore spoke out again for HR 676, and wants to remove insurance company profits from health care costs—remove private insurance companies all together. Moore claims that waits are longer in other countries because the poor people are also in line.

Gupta acknowledged that major reforms are needed in the delivery of care to poor people in our system.

Gupta is himself an accomplished neurosurgeon, who reportedly helped out the US Army with a procedure in Iraq.

Gupta also mentioned that Medicare will be bankrupt in little more than a decade. No one discussed nursing home custodial care, which is not covered by Medicare, but by a combination of self-pay, adult children (filial responsibility), long term care insurance, and Medicaid. This complicated topic definitely needs an airing on CNN.

The June 5 entry on this blog (see the Archive links by month) discussed Moore's appearance on Oprah, and has the link to the movie review.
Posted by Bill Boushka at 7:06 PM