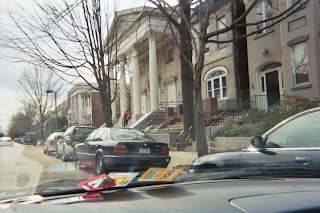 Sunday July 28, 2007 NBC Dateline offered a change in pace from its frequent and familiar repertoire of crime stings: an interview by Katie Couric in Edinburgh Castle in Scotland with J. K. Rowling. The story is “J. K. Rowling, the author with the magic touch. 'It’s going to be really emotional to say goodbye,' says Rowling as she writes the last book in the Harry Potter saga.” The story (from July 18) is here.
An audience of kids asked questions that led to spoilers. By now, most readers know that there is a kind of “resurrection” for Harry. Rowling had told Daniel Radcliffe at a dinner meeting that he would have a death scene, and left it at that. Each time a spoiler comes up the show put a warning on the bottom of the screen.

Of course, what is interest now, is a 17 year saga, starting in 1990, before the death of her mother, when the “idea” came to JK while on a train. She went to Portugal (which I visited myself in 2001 – Fatima) and came back to the UK on welfare, but started writing her book by hand. It would first be bought for about $4000 from a small British publisher Bloomsbury, before Scholastic bid for it and started the roll in 1997, the same year I pubbed my own DADT book.

The sensational success is hard to explain (especially with the lengths of the later books), but everyone tells me, kids love it. The books are intricately and accurately plotted with great integrity. The plots seem to generate themselves, rather than be constructed for a particular moral agenda. Yet there is an overriding moral, about loss, about integrity and overcoming loss in childhood.

It would seem right now to make a documentary movie about the writing of the books, and to explain the publishing phenomenon. She was not necessarily enthusiastic about the movies when Warner Brothers first approached her, but she says they maintain the imagery of the books. The first film appeared in 2001, when Radcliffe was 12, and I still remember the chess scene (where the Scandanavian Defense 1 e4 d5) is played.

Jen Brown has a story by Jen Brown, Exclusive: Potter author on the importance of death in her books (the story line above it is misleading, “Rowling: I wanted to kill parents.” Link is here.
Posted by Bill Boushka at 6:56 AM