PBS: The Dark Side 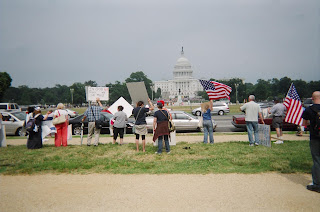 This PBS Frontline program (the title refers to what Lex Luthor thinks this phrase means only indirectly or with irony) documents the history of Vice President Dick Cheney and his role in directing the administration toward intervention in Iraq in 2003, starting almost immediately after Sept. 11, 2001. The film shows the collapse of the face of the Pentagon that was struck by the airliner. Cheney, while secluded separately from the president, authorized the shoot-down order during the morning of 9/11 and for a while he actually believed he had caused Flight 93 to be shot down in Pennsylvania.

The film presents the view that the organization of power within the administration after 9/11 built in some conflicts of interest that led to the less-than-objective assessment of the real problem with Saddam Hussein. Cheney for a long time held on to a story about a Czech story about a meeting between Mohammed Atta and an Iraqi operative in Prague, but in time the story seemed to become an imaginary urban legend. Similar stories went around with widely circulated reports about WMD’s in Iraq. They would seem to be credible with Colin Powell’s sales culture presentation to the United Nations in February 2003. There had been a meeting between Bush and Tenet in December 2002 in which Bush realized that the actual evidence of WMD’s was limited and questionable, and required stretching (the “16 words” with the “yellowcake controversy”; later mystery figure “curveball” – we had no agents in Iraq). Powell had by then developed a rift with Cheney. In general, the process was a lot like that of UFO buffs: the administration picked and chose hard-to-prove allegations (such as one about Niger [not Nigeria]) that could support its case for war in Iraq. Intelligence agencies were expected to provide analysis that was not truthful (in my sense of the “eternal feminine”) but manipulative and supportive of the president’s political agenda. The White House could congratulate itself and the intelligence services at its Christmas parties (which were not book signing parties), and then have to face the reality of the quicksand that bureaucracy can drive those in power into when having to face ambiguous information and ferret out the truth.

Indeed, in 2003, the President celebrated his victory after the fall of Saddam in three weeks, and his manipulative strategy seemed vindicated. But quickly it would become apparent that the WMD would not stand, even though Saddam Hussein had played possum. It's good to go back and look at Scott Ritter's film In Shifting Sands (link).

The film ends with a discussion of the Scooter Libby case involving the politics of the CIA. The bowels of Langley are shown as David Kay is interviewed. One effect of Cheney's maneuvers was that much of the "power" of the CIA got transferred to the Pentagon.

Michael Kirk has another similar film, "Cheney's Law" (60 min) that was broadcast by MPT on Oct. 16, 2007. The film says that Cheney never uses email and never writes down his conversations, because he doesn't want any incriminating audit trails. After 9/11, he contemplated the idea that we would need a "government of men" rather than the rule of law, to deal with the asymmetric threats.
Posted by Bill Boushka at 8:31 PM