Days has fun with heterosexual marriage: men have to support other men's children 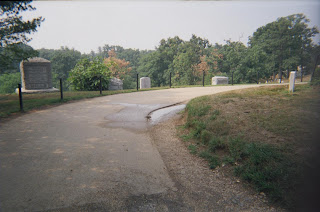 Well, NBC-Corday's Days or our Lives is determined to make as much fun of the way heterosexuals destroy the institution of marriage as possible. (Obviously it doesn't take gay marriage to "define marriage out of existence".)

Today, Tuesday Aug. 14, 2007, an African American woman "China Lee" approached Nickie Fallon in a Salem (Ohio??) restaurant as he was with Chelsea, and confronted him with a video of his "marriage" to China in Las Vegas while he was stunned by the concussion from the "accident" at Sami's apartment. She showed the "I do" with the LV Justice of the Peace, and blackmailed him for $25000 to back out of the marriage, otherwise she would sue for spousal support and support of his two step-children. Now I supposed that the video would be posted on YouTube and easily found by search engines, including Nick's future employers (I think that the ISA should hire him to hack and bust Stefano).

I wonder if these scams really happen in Las Vegas. All states have family codes requiring spousal support and child support. But presumably Nickie could go after the original father for child support. If he couldn't find the deadbeat dad, would he really be responsible? Someone could comment on this.

Now, back in the 1970s and 1980s conservative author George Gilder ("Sexual Suicide"; "Men and Marriage") had argued that women will naturally try to find men to support their children, other men if their efforts to tame men into stable marriages fail. Now Nickie Fallon Carraway has been blackmailed three times now (Willow, who was pregnant by Shawn but needed to find a "man"; Kate (Katrina) who makes a career out of switching embryos; and now China).

Nickie, despite losing the lab job over the hairbrush, had won $50000 in Vegas but has already given it away to Chelsea covertly through Katrina. (I don't know how he can afford to unless the ISA has hired hum secretly to hack.) China wants the money that already went to Chelsea. How will he explain this?

But the idea that men can be cajoled into supporting other people's children (as an extension of "family values") isn't so new. In fact, if Nick hadn't come clean, Lucas would think he was going to support EJ's kids.

On Thursday, Aug. 16 the ante was upped. China has camped in Nick's Las Vegas room and, in front of Chelsea, has her two little boys embrace Nick as his "dad." The race card is played, and the scene is rather offensive -- to use kids that way, in a scam to entrap men who have not fathered children into support. But the offensiveness is perhaps necessary to make a strong social and political point. It continued on Fri Aug 17 as a security guard returns China's kids to "Daddy" Nick in the hotel room. In the same episode, Sami got to rub and "save" Lucas's "extremities."

The theme of involuntary family responsibility has occurred before. TheWB "Summerland" show has a single fashion designer inheriting her sister's three kids after an accident. The movie "Raising Helen" had a similar premise.

Another way that a man can become responsible indirectly for someone else's children is by letting a mortgage be assumed without qualification.

I can imagine how filial responsibility laws could be worked into a soap opera plot.
Posted by Bill Boushka at 1:28 PM