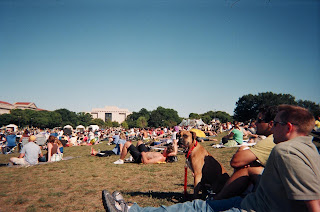 Much of her effort has been directed at STD prevention in countries where HIV and AIDS have become pandemic in poverty-stricken women, as it has in Africa. Women known to have AIDS are often ostracized by their families in Latin America. Jenna insists that moral theories about abstinence and such have little importance to her in practice.

The Jamaica segment was interesting, as Diane Sawyer encountered natives in the poor areas of town (Kingston) with extremely homophobic attitudes about what is "natural." 20/20 also showed a glitzy "house of ill repute."

Diane Sawyer asked Jenna about a quote from actor Matt Damon ("Good Will Hunting") who maintained that if the president and democratic processes really warranted a war in Iraq, then the president's only family should serve in the military. Jenna says she is "serving" as a teacher.

Jenna has a new book called "Ana's Story: A Journey of Hope," about an HIV-positive girl in a poor country, from Harper Collins. The girl's name is kept fictitious according to UNICEF confidentiality policies.

The idea of teaching an connection to kids as service is taking hold today in a way that I had not at all detected even ten years ago.

Update: On Sunday Sept. 30, the New York Times Magazine, on p. 111, has an article by Negar Azimi, "Why teach for America? A volunteer program for ambitious college graduates is getting great for the resume. But is it good for the country?"

Update: Monday Oct. 1, 2007: Jenna was interviewed on the Today Show Oct. 1 in a "One-on-One" segment. President Bush was somewhat concerned about her placing herself in the limelight while he was still president.
Posted by Bill Boushka at 8:06 PM