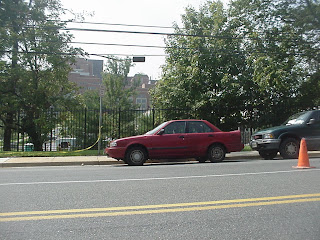 Is Chuck a new Jake 2.0, the long lost show from David Greenwalt about a nice nerd Jake (Christopher Gorham) “infected” with nano-technology giving him “powers”? UPN abruptly canceled this in early 2004, to the consternation of many. (Smallville has prospered, and a show “Numbr3s” about a math professor geek Charlie Epps (David Krumholz) helping the FBI, has prospered on CBS.

Chuck is more of a dramedy or comic-book comedy. Created by Chris Fadek and Josh Schwartz, directed by McG (Joehph McGinty Nichol) is presents a likeable geek, twenty-something Chuck (Zachary Levi), working in shirt and tie for the Nerd Herd at a kiosk (sort of like Apple geniuses) for a retail chain called Buy More. (Guess who they really are.) Nerd Herd has its own zipcar-like fleet similar to those of other geekolator companies. His sidekick is Morgan (Joshua Gomez) and Sarah Lancaster (“Madison” in Everwood) is Ellie, his physician sister who has so far "outperformed" him in life. Yvonne Strzechowski plays the "CIA agent" helping protecting him by taking him to discos. His "real" name "Chuck Bartowski" and imaginary name "Chuck Carmichael" are curious choices.

Chuck gets an email from a former roommate. After fixing a couple of video games on his computer, he opens an email and gets “infected” with all of the government’s knowledge about black-ops, and pretty soon is in the crossfire of a turf war between the NSA and CIA, as well as real enemies of the state. It all starts with an explosion, comic book style, and literally it doesn’t make a lot of sense. The nano technology idea in Jake was better, but what this show can go for is comedy. It’s supposed to be the comic book stuff, but Smallville, in the early seasons, proved that comedy can work. And it is on a bigger network.

Chuck, in fact, seems happenstance and gawky compared to the articulate "Jake 2.0" who (a bit like Clark on Smallville) could take his "powers" into moral battles with some premeditation. He learns some physical tricks, like the magic cape trick at a dinner party (he doesn't know that baked alaska really is supposed to be flamed), and he babbles with fear when forced to learn to fly a helicopter. I'm not so sure, after two episodes, that the character is convincing.

In Episode 3, we learn that Chuck was falsely accused of cheating at Stanford, so that seems to explain why he is making only $11 an hour. His boss confronts him with his "goals" (beyond existentialism) and wants to groom him for being an assistant manager at $13 an hour. That means, other people report to him; he makes decisions, maybe. Though he screams and hollers at physical danger, he likes what is in his head.

By the end of October, Chuck certainly has increased his people skills, able to manage Morgan, but his tendency to act scared during the slapstick episodes seems a bit out of character.

When I was working in mainframe computer programming, back in the early 90s when we took dumb terminals home for nightcall, we sat around in the breakroom and made up pitches for a horror movie (to be called “Nightcall”) where someone gets paged and logs on and monsters come out of the computer terminal and eat the programmer. I finally wrote a script where a gay man on call gets a nightcall while he has “company” and, while downloading a fix, gets infected while the company, who is a space alien, turns him into a Gray. How is that for a horror movie, maybe on SNL?

So, Chuck was "framed" for cheating at Stanford in order to recruit him to the CIA. After all, Chuck is a "good person." And back in 1999 he was working with C++.

On Nov. 19, the show presented the problem of screening international cargo (at Long Beach), which Chuck does with the help of his mental powers, and it isn't exactly all that funny.

I find myself wondering, could Zachary Levi have played Jake -- I think yes, and could Christopher Gorham play Chuck -- less likely.
Posted by Bill Boushka at 7:48 PM