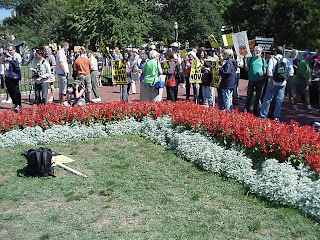 The History Channel also has a fifty minute film “The Next Plague: Avian Influenza” (2005). The film presents a hypothetical scenario of how a bird flu epidemic could arise suddenly and paralyze the globe’s economy for as long as two years, while killing millions. Perhaps it makes an effective companion piece to the longeon the black plague (reviewed Thursday Sept. 13). The film interrupts itself with a couple of disclaimers to the effect that this is a simulation.

It may not be quite as graphic as the ABC TV film “Fatal Contact: Bird Flu in America” (2006). It presents the idea of the final mutation creating a single index case in Vietnam. The person boards an airliner (as a “flying Petri dish”) and the pandemic starts. It seems unlikely that it the mutation could happen that suddenly; it’s transition into a human-human transmitted disease would probably be more gradual. But it is already avian-human transmitted and in rare cases in Indonesia may have been transmitted person-person. The film claims that about 50% of the mutation necessary for such a pandemic has already happened. The virus would probably first colonize in the back of the throat or in the bronchial tubes, and a person could be a “carrier” for several days without symptoms. Some people might never have symptoms.

The film claims that the US has only enough anti-viral medication on hand to treat 1% of the population, which it compares to the UK’s 25%. France’s 20%, and Canada’s 17%.

Unlike a tsunami or hurricane, whose effects are regional, a pandemic, the film claims, could shut down the entire economy as we know it for two years, and change all of our political institutions, our notions of political freedom. Persons who had recovered from the flu would be expected to help care for the sick, since they would be immune.

Earlier posting on other films on bird flu: here
Posted by Bill Boushka at 1:02 PM