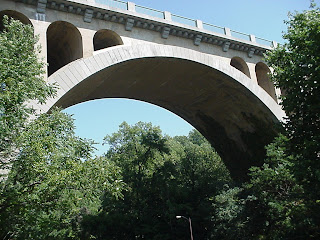 On Tuesday Sept. 4, PBS rebroadcast a WGBH Boston Nova show (one hour), “Dimming the Sun.” It had aired early in 2006, and I made a brief note on it in my “major issues” blog in an early entry in April 2006. Now, with Leonardo Di Caprio’s movie “The 11th Hour” having just started, this is a timely rerun. (See my movies blog for Aug. 28 for that film).

The subject of “global dimming” is a bit like an algebra problem. Solve for x this equation: x -1 = 1, where x is the amount of real global warming; where -1 is the global cooling from dimming, and 1 (in degrees Celsius) is the effective net warming. Of course, as in middle school Algebra I, you get x = 2. That is, the actual rate of global warming might really be about twice what has been observed so far, because the global dimming from particulate pollution has offset it. It's sort of like uncovering an "accounting problem" where some "losses" are cooked and hidden. But in the past decade or so, Western countries have cleared up a lot of solid pollutants (relieving a horrible drought in sub-Saharan Africa in the 1980s). If China and India were to do the same, global warming might get much worse, because the net global warming from greenhouse gases would go up even more.

Global dimming has an explanation in the physical properties of water (and maybe in the bonding angle that every high school chemistry student answers test questions on). When there are more microparticles in the stratosphere (good old earth science), water droplets get smaller and more numerous, making clouds more reflective. The principle is the same as the way snowpacks keep daytime late winter temperatures down even as the sun angle rises (and how loss of snow and glaciers could accelerate warming even more).

The show actually started with a review of the weather on September 11, 2001, one of the clearest days on the East Coast in memory. Scientist reviewed the temperature records for the three nights that there were no airliner contrails when the temperature variation between night and day increased almost 2 degrees F. (It’s possible that some of that could have been explained by an unusually clear pattern, at least on 9/11 itself.)

Some worst case scenarios have global warming increasing average earth temperature by 18 degrees F by 2100, or almost up to 77 deg. F. There is even the grim possibility that methane hydrates, frozen solid in the ocean bottoms, could be released, literally setting oceans on fire. (The entire Amazon basin could burn, too.) CH-4 is much more greenhouse-enhancing than CO-2. That’s why some scientists worry about a Venus effect here.

Update: On Tuesday Sept 18, 2007 ABC "Good Morning America" presented the theory that carbon soot from industrial output (especially in Asia) is making snow that falls on Greenland, the polar ice caps (especially the Arctic) and mountain glaciers less "white" and reflective, and therefore contributing to global warming, so the dimming effect could be less than reported in the PBS Nova report.
Posted by Bill Boushka at 6:23 PM