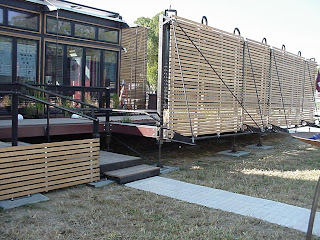 The most important was John Stossel’s “Give Me a Break” on global warming. Stossel assembled a few scientists who question that global warming is man-made. It has happened before, they say. Greenland temperatures rose faster in the 1920s than they do today. And carbon dioxide levels rise after the planet’s fever increases, not before. The scientists have gotten threats. Most polar bears, they said, are doing all right. One of them had been on the list of the IPCC, the Inter-governmental Panel of Climate Change (which shared a Nobel Peace Prize with Al Gore), and had to sue to get it removed. The link is “Man v. Nature, Challenging Conventional Views About Global Warming, here.

Another segment was about former ‘Nsync singer Lance Bass, raised as a southern Baptist in Mississippi under the belief that homosexuality is wrong and that you don’t question why. Bass has a book “Out of Sync” (Simon Spotlight_ The press boomed when he “came out” last year. Gay reporters claimed he looked a bit “chubby” in pubs around Washington like JR;s, but he still looks great on television. The other story was about how Justin Timberlake gradually weaned ‘Nsync out of existence by not coming back. This all seemed to happen, I personally noticed, as Justin’s forearms started looking shaved (they still do) in magazine photos and TV appearances. (He also covered himself with more tattoos for “Alpha Dog”). I had attended an 'Nsync concert ("Popodyssey") on June 24, 2001 in the Minneapolis Metrodome.The ABC story is by Jessica Hornig, “Lance Bass Opens Up: Singer Talks About Living Life ‘Out of Sync’”, here.

There were two other stories. Joanne Napolitano and Tracie Hunte have a story about an Oklahoma man whose young wife had a cardiac arrest. When he decided to stop life support, she miraculously recovered spontaneously (though she had been treated by lowering her body temperature). The story is “Back From the Brink: 'I Want to Go Home'
Jill Finley Was Taken off Life Support, but Made a Miraculous Recovery”
and is here.

Chris Francescani has the story about a woman who shot a pedophile who had molested two of her children when she confronted him at work and he said, “what do you want to do about it?” The story is called: “Murder or Vigilante Justice?
“Kim Cunningham Killed Her Daughter's Alleged Rapist; Two Juries Acquitted Her of Murder,” here.
Posted by Bill Boushka at 6:00 AM