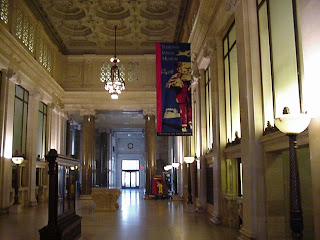 Today, Monday Oct. 29, 2007, the Dr. Phil show presented two men who had been “cuckolded” – deceived by “paternity fraud” committee by their female partners into supporting children that they did not father. The link is this: One man, Enrique, discovered that his thirteen year old daughter discovered that she was conceived during an adulterous affair of his ex-wife’s, and stopped paying child support and seeing her. Dr. Phil interviewed her backstage, and she was surprised at his lack of “heart” even if he was right; she had bonded to him.

Another man (Carnell Smith) from Georgia -- after talking about cukkolding in birds like cowbirds -- lost in court but pressured the Georgia legislature to pass a new law excusing men from paternity responsibilities when they can prove by DNA evidence that they are not the fathers. Then Dr. Phil brought on a couple of attorneys, including California attorney Gloria Allred (author of “Fight Back and Win: My Thirty Year Fight Against Injustice: How You Can Win Your Own Battles”), who argued that the interests of the child must come first, and questioned why it took these men so long to challenge the paternity. Another LA attorney claimed that paternity fraud is much more common than believed, and is being uncovered regularly by DNA tests.

Dr. Phil stated what he thinks at the end, and he feels that when a father has a long standing relationship with a child, the interests of the child come first. He believes that fathers must challenge these claims more quickly.

One can make the Catholic “moral argument” that if one participates in sexual activity at all, one has a moral responsibility to also participate in supporting children, even those who may not be one’s own. That is how this sounds.

The problem of supporting “other people’s children” is turning up in fiction, including several recent films, as well as the soap opera “Days of our Lives,” where paternity of several infants has been manipulated in the story, and where the geeky character Nick Fallon is “tricked” into a phony marriage in Las Vegas and winds up with custody of two (opposite race) boys.
Posted by Bill Boushka at 3:54 PM