Meet the Press interviews Stephen Colbert, and what he says is pretty outrageous 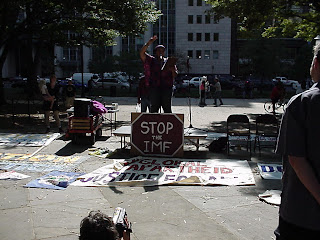 Today, Sunday, Oct. 21, 2007, Meet the Press featured an interview of "comedian" Stephen Colbert by Tim Russert. Colbert has a new book “I am America! (and So Can You) (from Grand Central Publishing, 2007) and says some pretty outrageous things. It’s pretty hard to tell if he is serious, but he rants about all the things that supposedly destroy our “culture.”

He wants to abolish pensions and social security. He says they are “tips” at the end of life. He wants to abolish tipping, too, of course. No social safety net, but let people perish. He can’t be serious. Or can he. Some people are.

He doesn’t want women to work outside the home, unless they bring their children to work. The only priority a woman should have is her children. (Does that mean that women are to be breeders at the behest of men?) Gay marriage destroys our culture because it hurts the feelings of (e.g., offends the masculinity of) straight men. He actually said on the show, “I need to get married to taunt gay men.”

Is there any logic in this? No. Not even Nathaniel Brandon would have cast "objectivism" this way. The MSNBC link is here.

He says he will run for president in South Carolina, and wants to lose once as a Republican and once as a Dem. Sounds like Lyndon Larouche.

Give me a break!
Posted by Bill Boushka at 9:32 AM