Oprah has special today, "Gay Around the World" 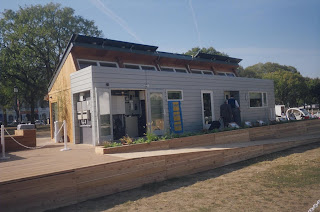 Today, Wednesday Oct. 24, 2007, Oprah Winfrey (4 PM EDT on ABC) had a show “Gay Around the World,” to show how serious anti-gay attitudes still are. The link is here. She started the show by interviewing Prince Manvendra from India, where homosexual acts can be punished by ten years in prison (it’s not generally known how homophobic much of India is, important given the migration of businesses there). He was disowned by his “highness” mother who had not raised him in person; instead he had been raised by nannies. He married, and his wife became depressed and left when he did not pay attention to her. He sought psychiatric treatment for a nervous breakdown, and promised not to attempt a fake heterosexual marriage again.

Then a young woman named Staveyann related her experiences in Jamaica, popular with tourists and famous in the James Bond movies. Attacks against gays are celebrated publicly in songs, and rapes of lesbians happen there. She moved to New York City to a Caribbean neighborhood in Brooklyn.

At this point Oprah gave some facts about other countries. In Uganda, homosexuals can be imprisoned for life. In Algeria, there are honor killings of gays; in Nigeria, gays are stoned, and in Saudi Arabia there are public beheadings. She also said that there are 65000 gays in uniform despite the “don’t ask don’t tell” policy and over a million gay veterans; and that GLBT parents are responsible for 4% of all adoptions, despite laws in a few states (like Florida) prohibiting gay adoption.

Her last segment was an interview with former NBA star John Amaechi, who is now a psychologist, and was the first NBA star to come out (even after retirement). They discussed homophobic comments by Tim Hadaway, which may embolden other youths into bullying. Amaechi maintains that the codification of "don't ask don't tell" into law for the military has psychological effects outside of the military where there can be forced intimacy, especially in collegiate and professional sports.

At the end of the show, Oprah interviewed Rachel Dowd, editor of The Advocate, and she pointed out that the best country for gays in the world is probably Sweden, which decriminalized sodomy in 1944 (it took the US until 2003). That is so despite the fact that Sweden has mandatory paid maternity and paternity laws that are very generous with heterosexual parents (among the most generous in the world). How do they make it work?

Oprah repeats the show today (4 PM EDT). I don't know if is exactly the same or includes an update.
Posted by Bill Boushka at 2:55 PM

I haven't seen this episode of Oprah yet, I certainly hope to catch it so I can see it for myself