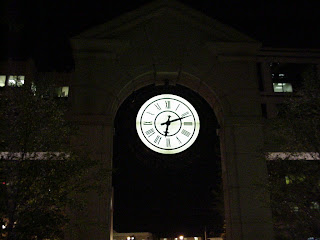 The History Channel presented its documentary on Global Warming today, the second major television documentary on this in less than a month (the other was Anderson Cooper’s “Planet in Peril”, discussed on this blog Oct. 23). It is called “A Global Warning” (by Chris Hoskins?) and presents much more material about natural change in global temperatures than have other documentaries.

About 650 million years ago we had “snowball” earth because somehow a lot of carbon dioxide dissolved, leading to freezing and ice reflection. Evidence of this can be found with dropstones in the Mojave Desert (the film incorrectly placed Death Valley in Nevada). Even at the Equator the earth froze. Then volcanic activity released more CO-2 and the ice melted. A couple other major warmings and extinctions happened about 250 million years ago and then 60 million years ago. They could have been caused by massive volcanism in Siberia, or by changes in the earth’s orbit (becoming more elliptical) that happen as part of a natural cycle. The Ice Age about 30000 years ago might have come to an end with the release of some methane hyrdrates after volcanism and earthquakes.

The program covered the Little Ice age about the time of Colonial America, as possibly related to fewer sunspots. There were also sudden coolings after volcanic eruptions, such as the Year Without a Summer in 1816, because some volcanoes release sulfur dioxide, which is relective. An eruption of the Yellowstone caldera, 50 miles across, could cause a nuclear winter and the end of civilization.

The evidence of recent warming certainly points to man’s influence, in increasing greenhouse gas emissions. This could be offset by future cooling, such as another volcanic eruption or astronomical changes. But it could also be exacerbated. One scientist suggested that rapid warming of the tundra could cause catastrophic release of methane (as a greenhouse gas) with a much more rapid increase in global warming and flooding.

The end of the film presents the grim possibility of a mass extinction of man (just like many species going extinct as in Anderson Cooper’s film) because of sudden global climactic cataclysm. Hurricane Katrina and the Europe Heat Wave of 2003 were warnings; what about a Category 5 going into New York City? The behavior of China in the sudden explosion of its use of fossil fuels is a factor.

Earlier tonight, the History Channel presented two segments of “Modern Marvels” with presentations of renewable energy, with windmill farms and ocean tide power, and, in Iceland especially, geothermal power. Those programs presented rosy pictures that the nation’s demand for electricity could be met with entirely renewable sources. The use of various plant oils as motor fuel (pratical with diesel engines found mainly in Europe -- the car I rented in France was diesel -- was shown. Ethanol from sawgrass, sugar cane and corn were compared, with sawgrass the most promising. (Don't use linseed oil!)

The film 'Global Warning' shown tonight (Jan 27th 2008) in Pacific area by History Channel is an excellent film - so long as you can stand the reality that it depicts - We are now like the Sun in our degree of impact on the Earth. Or a comet hitting Earth. We have reached cosmic standing as a species. We can up-end the entire planet in a matter of decades.

From this dark place of insight will be born a new era and a new identity for humans as cosmic beings with supreme responsibility for life in this part of the Milky Way galaxy. That is my hope.

But hope is not enough. We have to act.

Does anyone know who made this film, by the way? I want to contact them and I do not see any credits given on the History Channel website. WHY? What on Earth is the reason for not presenting the film-makers - giving their names -? I am on this Blog because I am searching to know who made GLOBAL WARNING film...