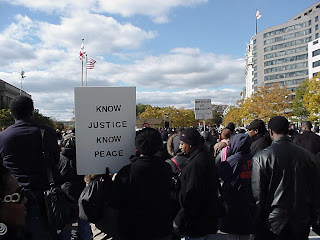 Today (Friday Nov. 16) the usually gentle-mannered Judge Alex Ferrer on Fox (the same channel that carries Judge Judy and several other reality TV court programs) had an interesting case. A woman was sued for libel for creating a Myspace page in which she took photographs of her previous roommate from Craigslist and then presented her as a prostitute and other things. Curiously, the defendant brought another woman with her who admitted to setting up the page. The Judge finally told them that the other woman could be pursued for a libel judgment. At the same time, the other woman had, on Craigslist, presented herself as "disease free" and the Judge questioned as to whether that carried the suggestion of prostitution. The Judge, however, still felt that the Myspace page (clearly in violation of Myspace own terms of service) could be libelous for other reasons. Judge Judy once called some of the people on her show as like kids playing in a sandbox, and today's case definitely came out of the sandbox (no jungle jim).

We've seen this sort of thing before, as an episode on Dr. Phil (Dec 6 2006 on this blog) where someone created fake Myspace pages for a school assistant principal. Ordinary people, and not just "professionals", can get themselves into trouble when they defame others online -- and we hear more and more about this all the time.

CNN also reports a case near St. Louis where a teenager girl was bullied by an apparent "friend's" Myspace page, and it turned out that the page was set up by other parents to "spy" on the girl. The end results were tragic. Law enforcement said that no laws were broken. NBC Today show also reported this on Nov. 18, and the MSNBC / AP story "Mom: Girl killed herself over online hoax: Teen distraught at end of MySpace relationship; neighbor family created ID" is here.

On NBC Today show Nov. 29 an internet safety expert noted that there is a federal statute against anonymous cyber-bullying that might apply this case. The safety expert encouraged parents "Google your child" and look for what others are saying about the child (common names or synonyms are an obvious problems). She also encouraged parents to monitor their teen kids social networking sites and to keep them whitelisted.

Anonymous said...
This comment has been removed by a blog administrator.
12:59 PM