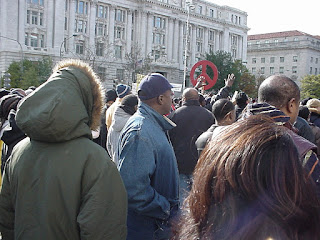 PBS: NOVA: Athens, the Dawn of Democracy (it aired at 10 PM EST Nov. 19, 2007 on PBS WETA in Washington DC), a one hour documentary, lays out the basic paradoxes and conflicts that arose out of the first major democracy in western history. Democracy in Athens spanned about 150 years and prospered relatively well until challenged by war with Sparta and by internal tensions that seem to follow the speech of philosophers like Socrates.

The early part of the film showed the realism of Athenian sculpture, compared to Egyptian art. It appears that the realism was achieved by having live models covered with casts. The process was demonstrated as a cast was placed around the leg of a male model, then carefully removed, leaving a hollow cast into which wax could be poured to make a component of the statue.

Athenian democracy ran into the paradoxes implied by majority rile, which we know can turn into the "tyranny of the majority." Many people became sensitive to having their religious ideas challenged, just as in today's world. Democracy, as the film implies early, is itself a continuous experiment where change is an essential experience.

In Athenian society, men often congregated socially, and discussed philosophy. The film says that some of the associations were homoerotic, which has long been reported. Socrates was well regarded for many years but became increasingly controversial as Athenian society was challenged from within and especially from without. Socrates was something like the equivalent of an 18th century pamphleteer or early 21st century blogger, and he preferred to investigate, muse, write and broadcast and let the chips fall where they may, rather than seek direct political power and authority and have specific recognized relationships with others. His approach to debate and solitary self-examination led to the term "Socratic" (and I recall a tenth grade plane geometry teacher who extolled the virtues of "socratism" and also of the "sophists" in ancient Greece). Yet this very diffidence seemed to contribute to the anger of the "people", and eventually led to his execution by hemlock poisoning. People sometimes believe that the ideas of others are articulated in order to "toy" with their ability to make intimate commitments; in that sense, "freedom of speech" might paradoxically undermine freedom, as the film points out.

Plato was Socrates's most famous pupil, and the film notes the ambiguity of some of Plato's ideas (Leonard Bernstein's Violin Serenade was dedicate to Plato). It notes that Hitler and Stalin claim to have extracted ideas from Plato.

The PBS Frontline documentary on Darfur ("On our Watch") aired Nov 20 is discussed here.
Posted by Bill Boushka at 8:03 PM

This program is incredibly relevant to our times. This makes me wonder how much of what I have been taught is true... Excellent program.