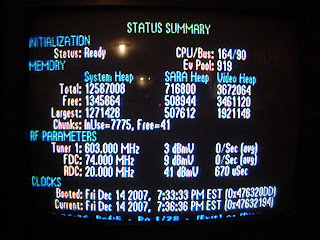 "Killer Jellyfish": This one hour biology science documentary, narrated by JV Martin (who narrates the History Channel "Mega-Disaster" series) examines a zoological oddity: the box jellyfish, a coelenterate with four groups of fifteen tentacles each, four groups or six eyes each, and four primitive brains. They reproduce with a complex life cycle: first a sexual cycle creates a polyp, which crawls along the ocean floor like a blob (literally like that of Steve McQueen's famous horror movie) and then spawns identical copies (so far like corals) and then become mobile.

The scientific name of their class (a pun here on object-oriented programming, given their "behaviors" or "methods") is cubozoa. The true jellies (much more common and less deadly) are called scyphozoa. Some examples of the box jellyfish are the larger Chironex fleckeri and the thumbnail-sized irukandji or "sea wasps". The poison emitted by their nematocycts is the most potent known in the animal kingdom. In Australia, nets are able to keep out larger species nit irukandji. The film documents the symptoms of two scientists who get apparently trivial stings by sea wasps and have days of agonizing pain. The instantly fatal nature of the poison is an important part of the box jellyfish's feeding strategy.

The creature sounds so bizarre that it seems alien, as if one could find them in the under-ice ocean on Europa; in fact, however, they require tropical waters, and away from Australia most species are not as venomous. Study of the creature, with its basic life functions and cycle, fits well into any invertebrate zoology course and gives a perspective on just how varied animal life can be.

The Discovery Channel link is this.

A similar film (Sat Dec 15) was Killer Squid, about the Humboldt squid, the most advanced of the mollusca, but which live only a year (until they breed) and actually go into cannibalistic feeding frenzies. The tentacles have 36000 teeth and the food is manipulated with a beak. But they can hunt in schools, and actually have social behavior not seen before in cephalapods. They have good problem solving ability, like octopuses. Over-fishing may have created the impression that they behave aggressively. This is as high as invertebrate evolution ever got.

Picture: Cable TV box suddenly random rebooting, which it does a lot of these days. I don't know why it drops connections so often.
Posted by Bill Boushka at 6:34 PM