Discovery: Secret History of the Freemasons 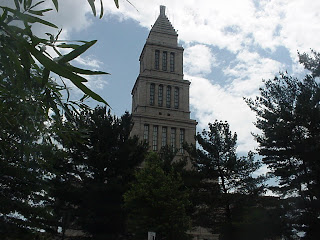 The program unfolded in typical Discovery documentary style, with lots of rhetorical questions asked repeatedly. The basic thesis was the idea that the Freemasons are the custodians of secret knowledge which they use to “rule the world” and impose a new world order. There are loose connections to many developments in history, going back to the building of King Solomon’s Temple and the attempt to get secrets from a stone craftsman named Hiram Abiff.

Some people connect them to the Knights Templar, an exotic order of warrior monks that became powerful during the Crusades. The cultural fraternity as we know it developed from the stonemasons’ guilds in the middle ages. The secret passwords and symbols were associated with the passage of “trade secrets” within a profession. In the 18th Century, “speculative masons” started forming fraternities just to explore knowledge.

The program explores several urban legends connecting the Masons to a sensational underworld murder in Britain in 1982, to Jack the Ripper, and to an accidental shooting in a Lodge in New York.

The program ends with a televised rendition of an initiation into the First Degree. It is essentially a harmless acting out of the incident in Solomon’s Temple but does involve a fake slaying. In the end, Freemasonry is more about self-improvement and the general promotion of virtues associated with liberty than anything else.

There are other cultural fraternities, such as the Rosicrucian Order AMORC, which also has a system of degrees and rituals. AMORC does speak of “mysteries” or of knowledge passed by avatars over the ages, with Christ such an avatar. Like the Freemasons, AMORC insists that it is not a church as such. But New Age writers sometimes speak of “the invisible empire of the Rosicrucians.”

The idea that some of knowledge is secret and passed on by organizations really grows out of the idea before that knowledge should be passed within churches, families or trades. The Internet is changing this perception. Ideas like wikis (and Wikipedia), search engines (Google, etc), Web 2.0, and knowledge databases are taking what started with systematic indexing by libraries (still done and sold in compilations by companies like LexisNexis) and uncoiling them in a manner that they are much more usable, at kuch lower cost, by the “average person.”
Posted by Bill Boushka at 7:16 PM

I think this was the worst "documentary" I have ever had the misfortune to watch.

First, they present partial truths using faulty logic to draw ominous conclusions about conspiracy theories. It seems to be compiled by authors who were not interested in doing much research - like they just had to get something controversial out quick as a commercial for the movie.

The "facts" presented were sparse, and every now and then they would throw in one supposed "expert" as if that person knows it all and whatever that person says is law.

So after all the silliness, trying to make every little thing into a spooky, dark underworld suddenly they do a 180 saying, "Well, these things were just coincidences," or "This is not true after all." They present NOTHING to back up their silly about-face. Every now and then they have a semi-expert throw out a personal opinion. The whole awful show was FULL of holes.

The only REAL mystery you'll find in this non-documentary is at the end when you wonder "Why, oh why did I waste time watching this?"

As a Mason I must say ,not that any anti-Masons will care, that the greatest mystery of Masonry is the central meassage which everyone already knows, communicated non-verbally as were the ancient mysteries. The moment is eye poping for the participant.

But the message is one everyone already knows. The method is sublime. You can ONLY experience it. To read it is nothing.

You already know the secret though. The medium is what opens your eyes.