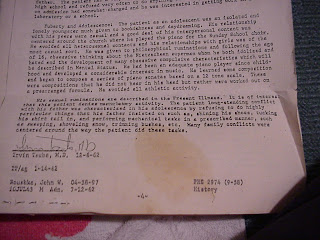 Tonight the History Channel aired a 2 hour documentary "pseudo-movie" with Tom Brokaw, standing on Haight Street in San Francisco, remembering what it was like there as a young reporter in 1968, which he views as the pivotal year of the cultural revolution. A key feature of society that year was the draft (when sharing the risks of society was supposed to be morally mandatory), with some people going to Canada, leaving us wondering if it was out of sincere belief or out of physical cowardice; student deferments would come to an end in 1969 with the lottery. Brokaw chronicles all the events of that year: the Tet Offensive, Johnson's famous speech not to run, the Orangeburg Massacre, the assassinations of Martin Luther King and Robert Kennedy, the "Medium Cool" riots (complete with police fish nets and tear gas of The Eighteen Minutes) at the Democratic National Convention in Chicago in August, the November election when Nixon squeaked by. He covers "Alice's Restaurant", the Smothers Brothers and the government's attempts to censor it, the mounting casualties of the Vietnam war (16,500 soldiers died, more than in any other year, even as Westmoreland kept asking for more troops), and the candidacies of George Wallace and Eugene McCarthy. He interviews a nurse who now helps maimed veterans returning for Iraq just as she had as a young nurse in Vietnam, she thought, out of patriotic duty. The comment was made that in both wars, men were asked to die for a lie: in Vietnam, the Domino theory; today, the WMD-in-Iraq myth. He also mentioned protests overseas (the Paris protest was the subject of Bertolucci's "The Dreamers" as well as Avellis 's "My Super 8 Season") and, with Pat Buchanan (who is also shown young, as if he ever were young -- he was), discussion of Nixon's "Silent Majority."

Now, at the beginning of 1968, I took and squeaked by my Masters Orals in Mathematics at the University of Kansas, and enlisted for two years on Feb. 8, 1968, going in two weeks early after getting my draft notice. I had taken the physical after my William and Mary debacle (Nov 28 2006 entry on my main blog) and gone from 4-F to 1-Y to 1-A in three physicals. Other guys in the dorm at KU pasted notes on the doors that I had offered myself as cannon fodder.

I would spend fourteen weeks in Basic Training at Fort Jackson, SC, spending a few of them in Special Training ("Tent City"). I recall that period so well that I could direct a movie about it. We heard about the Orangeburg mess on the radio while mopping the barracks floors at night ("Simple Simon" would play); after the King assassination, we were actually put on "red alert" as if BCT soldiers could actually quell riots by mere authoritarian presence. I was 24 years old, and still had the hair on my legs, although then I never thought to check. In the end, I would be sheltered and coddled, and "serve without serving". I would get the Mathematician 01E20 MOS, and get station at the Pentagon the summer of 1968. Then, after my top secret security clearance investigation, I would get a mysterious transfer to Fort Eustis, VA, to a little white building (no longer there) called USACDCTA (Combat Developments Command Transportation Agency). In the eyebrowed barracks, I would come to be known as "Chicken Man" while other men there got animal names (The Lizard, The Ostrich, The Ocelot) like they were imaginary playmate daemons from The Golden Compass. I was "out" the way the Sicilian Defense is a semi-open defense in chess. By the time of the November election, most of the troops were "Nixon men" because they thought Nixon would be more likely to get us out of Vietnam. A favorite epigram them was "Back to the Bay."

Picture: Medical records from pseudo-reparative therapy at NIH in 1962. The government -- even a "liberal Democrat" administration -- actually did things like that then, but not for long.
Posted by Bill Boushka at 8:05 PM