PBS: Frontline: Inside the Teenage Brain 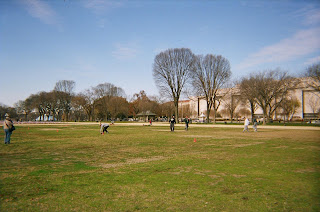 PBS Frontline originally showed the one hour program "Inside the Teenage Brain," directed by Sarah Spinks, on January 31, 2002. It was reshown tonight Dec. 11, 2007.

The program focuses on a few families, especially in Rhode Island and Minnesota. The child's brain reaches 95% of its future size by age 6, but the cerebral cortex thickens, and in adolescence the process of pruning starts, conceptually like pruning a tree into its final shape. Abilities that get used are kept. This is particularly true of skills that require unusual mental abilities (like art, music, chess) or athletic skills for specific sports. It is desirable to be versatile, but to be really good in several specific talents is biologically a significant challenge. (Hence the phrase, "Jack of all trades but master of none.") The cerebellum is also important. Teenagers apparently do not have the circuitry developed to calculate the consequences of risky behavior. (Obviously, there are exceptions. A person who becomes a grandmaster of chess by the teen years obviously can calculate "consequences" and apply the same skills in life.)

The program also examined the need for sleep in teens, which is over 9 hours, and includes REM (rapid eye movement) sleep, when the brain consolidates what it has learned (like a computer encrypting and compacting data) and builds associate memories. Circadian biological rhythms for teens move into later portions of the day, which encourages high schools to encourage later start times to encourage better behavior and performance.

One wonders, are the brains of prodigies different?
Posted by Bill Boushka at 7:41 PM