By the People: Democracy in the Wild 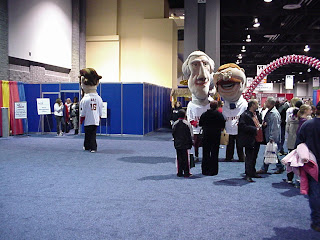 By the People: Democracy in the Wild (2006, Hyperbaric Films, dir. Malinda Picke) was produced for PBS. It gives segments from Election Day (and some of the training preparations) in November, 2004 for the presidential election in Marion County (Indianapolis), Indiana.

The DVD title has the quote from John Adams in 1814, “There has not been a democracy yet that did not commit suicide.” The management of polls is presented by the film as an exercise in guarding democracy. Every county runs its own elections (even national elections), so there are about 3033 “elections” on Election Day. Marion County has 914 precincts. Imagine the volume of separate polling places. The polls are run by a small amount of supervisory election staff, and up to two million “volunteers” around the country. In some counties the volunteers are paid a small stipend for the day (in Arlington VA it is $130), that runs up to 18 hours, without the worker being allowed to leave the premises. In Virginia the volunteers are called “election judges” and are sworn in. There is a shortage of about 500,000 poll workers nationwide, and the average age is about 72. One can debate paying the workers more, and trying shorter shifts if better pay attracted them. But one idea is that poll work is a kind of “national service” or volunteerism. The point is that ordinary citizens are supposed to police the elections and make sure that, in a culture that otherwise stresses partisanship, that they are run fairly.

In the film, the volunteers have to expend extra effort to get handicapped people to the polls, and track down the validation information on some voters. They even have polls in prison. During the film, one candidate passes away, and the sheriff has to come and make certain areas off limits. There is a quote from a politician who apparently says that 9/11 happened because Bush stole the 2000 election.

In 2004 in Marion County there was a 50% turnout, and that was disappointing. About 71 million people in the country did not vote. The turnout for the midterm election in 2006 was surprisingly strong, because of voter discontent with Bush's performance.

I don’t know if this film is related to the “By the People” program (from Williamsburg) recently on PBS and discussed on this blog Jan. 5.

The South Carolina primaries Jan. 19 this year illustrated some problems. In one location, the precincts tried to get a judge to extend the poll hours (which poll workers would not like). One one location, poll workers could not get the machines working, so paper ballots had to be brought in, and there were not enough. In the movie, the machines accepted punched card ballots and counted them automatically (as in Minnesota). In Virginia, WinVote machines are used, and they do not leave a detailed paper trail of each vote, but they can recover form freezes and hangs without losing votes, and they save all the details on USB inserts.
Posted by Bill Boushka at 9:08 PM