Ellen -- a short but sobering interview with Tom Brokaw 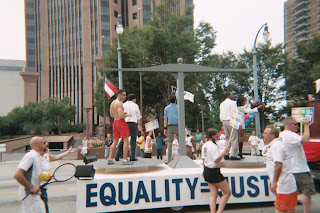 Ellen (website) moved over to 2 PM Eastern Time last fall when the soap "Passions" went off NBC daytime, and it always has a lively prelude, with Ellen De Generes being lifted in the air by admirers.

Today, Jan. 2, 2007 she did a plug for the writers, saying she needs them back and wants them to settle the WGA strike essentially immediately, and that she thinks they should get what they want. Then Joey Fatone made a post ‘Nsync appearance of his own, with a reprisal of “Bye Bye Bye.”

But the important interview was with Tom Brokaw, former NBC News anchor who pitched his book “Boom! Voices of the Sixties; Personal Reflections of the 60s and Today” (Random House). In talking to Ellen, he made a lot of the Vietnam era draft, and pointed out that we do not have one today. Families with men in the service have made enormous sacrifices, but he pointed out that the American public as a whole has not been expected to “sacrifice.” Of course, the Bush administration policy of calling in Guard and Reserve personnel for multiple extended tours amounts to a “backdoor draft.”

Reportedly, Jay Leno will host Mike Huckabee tonight, who will cross a WGA line. Only Dave Letterman, who is supposed to bring big star Robin Williams on, is in the clear because of his Separate Peace. It is said now that the Golden Globes are negotiating a separate peace.
Posted by Bill Boushka at 12:57 PM