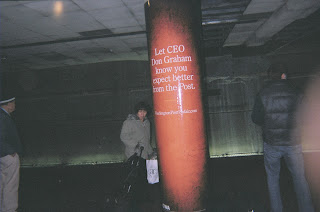 The Arts Section (B1) of the Martin Luther King Day (Jan. 21, 2008, the coldest day of the year by average in Washington DC) New York Times has a story by Jacques Steinberg, “Scripting the Soaps Is the Hidden Drama of Strike-Plagued Daytime,” link here. The WGA and Producers seem to be in a breath-holding contest, as if frozen into ice sculptures.

For the eight daytime soap operas, the scripts are somehow getting written. There are various methods. Some can use a WGA designation called “financial core.” Many are getting written by management, or possibly freelancers. Some make hidden visits to writers. With the Internet, it’s possible to work without getting caught crossing the picket line or working as a scab.

The WGA has a legitimate interest in the soaps even though they are thought not to be recycled the way other shows are. Some are shown on the Internet (“Coastal Dreams” and possibly “Passions”). This trend may continue as some shows don’t do well enough to stay on network TV but might have a niche audience (like GLBT).

Still, “Days or our Lives” continues to have some genuinely interesting adventures, as silly as the central family fued or vendetta seems. The issue of involuntary father’s responsibility without procreation is explored with the Gatsby-like character Nick Fallon (Blake Berris), as well as a bigger problem of being responsive to the needy without being run over by them (a recent theme on Oprah, just last week). Then, there is a “Trouble with Harry” subplot with Ford Decker (hope that the actor Matthew Florida gets to play a nicer character in the future). When I substitute taught, I often saw “Days” running in the teacher’s lounge, and everybody (teachers and teenage girls alike) know who Sami (Allison Sweeney) is. And now, Drake Hogestyn seems to have settled his feud with Corday Productions and is back as a zombie version of the Pie'oh'Pah assassin, in the likeness of a withering John Black. Marlena (Deidre Hall) is in love with a fantasy.

Soap opera is very hard work. I know from working on the set of Somerset in 1976 as a boom operator during the Nabet Strike, as NBC’s Brooklyn studio. I don’t know it the production facility is still there. And it seems that many actors don’t get to work every day, which would make it hard to retain an income for many of them good enough to live in NY or LA.

TruTV has a show "The Real Hustle," discussion on the consumer protection blog, here.

Michael Cieply reports in The New York Times, "Progress Toward Ending Writers’ Strike", that there could be a settlement in the WGA strike within a few days. The link is here.
Posted by Bill Boushka at 11:35 AM