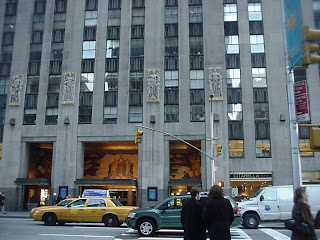 The highlight of the show was in the middle, with the fake news broadcast by Seth Meyers and Amy Pohler, when Republican “Christian” presidential candidate Mike Huckabee, (former) governor of Arkansas, made a live appearance. Seth asked him why he doesn’t drop out, given the idea that it is mathematically impossible for him to have enough delegates to get the Republican Party “GOP” nomination this summer in Minneapolis. He answered that he doesn’t do math well (he probably couldn’t pass the test for “No Child Left Behind”) but believes in miracles in the Bible. (Even God can’t change the facts of mathematics, just the constants of space-time.) He said he was counting on the super delegates. Meyers asked him, aren’t those only in the Democrat party? Huckabee didn’t "realize" that. Meyers had to provide Huckabee a gentle reminder that it was time to leave. Here’s the link. I wonder if Huckabee's appearance matters in McCain-Feingold campaign finance law.

The show started with a face-off between “Hillary” and “Barack.”

There was an SNL Digital Short with a senior citizen making fun of being old, with Andy Samberg and Will Forte coming in to mimic parts in this year’s Academy Award nominees, especially “There Will Be Blood,:” “Juno”, and “No Country for Old Men.” Later, near the end, there was a skit where oil man Daniel Plainview steals milkshakes from other café guests with an extended draw mimicking and oil rig, and the other films were parodied. Surprisingly, Paul Dano’s role as the Pentecostal Eli Sunday was not parodied, but Ellen Page 's Juno’s was included, as was Javier Bardem’s from “No Country.” (Ellen Page is due to host SNL on March 1.)

One of my favorite earlier SNL Digital Shorts was Samberg's "Laser Cats." No real cats, lions or tigers were harmed.

People stood in line at NBC Rockefeller Center to get tickets.

On Sunday Morning Feb. 24, the NBC Today show (Matt Lauer) interviewed Mike Huckabee and said it was possible that McCain would not have the necessary 1191 delegates for the first vote in the convention. He says he did do his arithmetic and algebra "story problems". In politics, "things can happen very quickly."

Breaking News! At 10:34 AM this morning on NBC's "Meet the Press", Ralph Nader, 74, announced (to Tim Russert) that he would run for president in 2008 as an independent. He did advocate single payer health insurance and claims that this is what most Americans really want. He was challenged as to whether he spoiled the 2000 election for Al Gore. Nader's website is votenader.org. I had to try several times to get past the timeout errors from heavy use. Book review of Nader's 17 Traditions here.
Posted by Bill Boushka at 5:03 AM