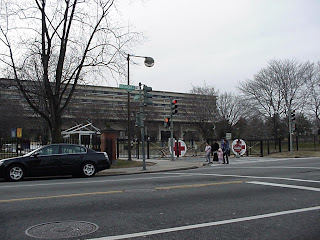 The remaining Republican candidates -- Mitt Romney, Michael Huckabee, John McCain, and Ron Paul, held a debate at the Ronald Reagan Presidential Library in Simi Valley, CA on Jan. 30, apparently their last debate before the Super Tuesday primaries on Feb. 5. The debate was rebroadcast on CNN during the Super Bowl which was airing on Fox (where the New Jersey Giants upset the suburban Massachusetts Patriots 17-14).

The CNN link is here. Anderson Cooper hosted, but Wolf Blitzer has interviewed them individually since then.

The candidates made the point that today's global, competitive economy requires workers to become "job ready" very quickly, a cultural change hard for many people to take. But Huckabee suggested that a president needed to be able to see the world from the point of view of the worker as well as a CEO. For me, an example comes to mind. One of the weekend news inserts talked about disabled football players, that pro-football is a sport of "collision" rather than contact. But how many people
understand that?

Huckabee talked about the importance of infrastructure investment to stimulate the economy. Ron Paul criticized the Fed's priming the economy with money and give-backs that it doesn't have. No one was too critical of American corporate or consumer behavior (the "get something for nothing" mentality that the Coen Brothers make fun of in their movies) from a "moral" perspective.

Both Romney and Huckabee have stressed the importance of honoring immigration laws. Huckabee has outlined a plan to give illegals time to comply but to make them "wait in line" to comply with the system, with some allowance for their kids.

The candidates were asked how they could carry on the Reagan Legacy. Romney stressed the importance of being "pro-life" and protecting "marriage" with a constitutional amendment. One certainly sees a huge cultural gap between the parties, but when analyzed, the cultural differences seem to grow more out of history than out of logic.

Giuliani has withdrawn and endorsed McCain. Giuliani was probably socially much more liberal than McCain, Huckabee or Romney. But there will not be a "subway world series general election." Of the candidates, McCain might be the most likely to closely follow President Bush's plan in Iraq, but he has spoken a lot about the problems of soldiers (repeated deployments) and veterans, especially medical care issues.

Ron Paul is the candidate of libertarians, and would be of libetarian gays (such as with GLIL), but there has been controversy over some anti-gay letters in the past, such as here.

The 2008 Republican Convention will be held Sept 1-4 in the Xcel Center in St. Paul MN, link here. My first exposure to national political conventions as a boy was in summer of 1952 (age 9) when suddenly all the channels had boring (to a kid) speeches all day long for a week and my parents said "Republic(an) Convention." They liked Ike.
Posted by Bill Boushka at 7:38 PM