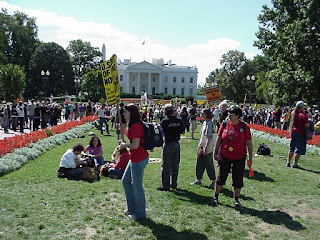 Tonight, HBO aired the short documentary film “Thank You Mr. President: Helen Thomas at the White House,” directed by Rory Kennedy, about 40 minutes. The web site is this. The film covers the career of the chief of the White House Press Corps since 1961 (when I was graduating from high school). Helen Thomas, born in 1920, was a “career woman” although she married Douglas B. Cornell during the Nixon years, with great social approbation.

Helen was always outspoken. She challenged President Kennedy to explain the concept of “Managed News.” Decades later, during the Iraq war, she would challenge the press secretary about the loss of “innocent” civilian lives in Iraq. “Regret doesn’t buy back a life” she said. She also asked President Bush about the separation of church and state when Bush promoted his faith-based initiatives (although now Barack Obama wants to do something similar). There are intermediate-era scenes, as when she quizzes Ronald Reagan about the Iran contras.

The film runs through many of the major highlights of history, including Nixon’s Watergate resignation in 1974, which was largely the result of the press (Woodward and Bernstein), and Gerald Ford’s first speech in which Ford said that the long nightmare was over. I remember that (I was changing jobs then and going to NBC in New York); I remember hearing Ford say “I am a Ford, not a Model T.” (Ford also put his foot in his mouth with a comment about Poland, when I shared an office at NBC with a man whose ancestors had come from Communist Ukraine.)

One of the interesting things about the film is the progress of technology. Until the 90s, press reporters did not have cell phones, and had to rush to find real land phones and find computer terminals (in earlier days, teletypes) for their stories.
Posted by Bill Boushka at 8:22 PM