PBS: Forgetting: A Portrait of Alzheimer's 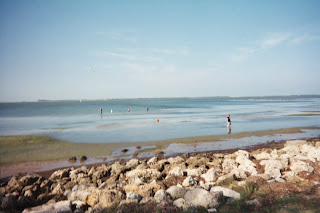 Tonight (Aug. 14), some PBS stations, particularly WETA in Washington DC, aired the 2004 film “Forgetting: A Portrait of Alzheimer’s” followed by a panel discussion of medical and social experts to bring progress up to date. The link is this. The film is produced and directed by Elizabeth Arledge.

The program started characterizing the disease as one which robs the person of his or her identity, or everything that makes him or her who he or she is. The film then shows some of the common early symptoms and diagnostic tests. A female is asked to recall a list of three objects, several minutes after distraction, and to be able to spell “world” both forwards and backwards. The backward spelling would require short-term memory skills.

The program gave some of the history, with the characterization of the disease by German physician Alois Alzheimer in 1901.

In 1993, there were about 500,000 cases in the United States. Now, in 2008, there are five million. The primary cause for the increase is the rapidly lengthening life spans, long enough to trigger changes in genetically susceptible people. During the ninth decade of life, the incidence increases rapidly. If a younger person is diagnosed and does not have other medical issues, the life expectancy ranges from 8 to 20 years; death often occurs from other causes.

The documentary explained the physiology of the disease. There is the development of a toxic amyloid plaque, and of tangles. Synapses are destroyed, but so are neurons in such a way that some functions are lost completely. There are other forms of dementia probably related to vascular insufficiency. These may be milder and the memory disabilities may be more specific, and sometimes be more tied to emotional or attachment issues.

The documentary discussed the possible genetic susceptibility, especially chromosome 21. A few people have developed the disease as early as the fourth decade. One woman in her 50s was shown, and the family was shown making end-of-life plans. The disease is different from Huntington’s Chorea, which also strikes in mid-life and is genetic and easily tested for.

The panel afterwards discussed the improvement in pharmaceutical therapy for the various manifestations of disease progress. But toward the end, the question was asked, are we ready for the demographic shock? This is a catastrophe no one is ready for. We had AIDS in the 1980s (through the present day) and learned to manage it. He had 9/11 and Katrina. But as of now, the problem, as one commentator said, we have a “diverse” population which may not be “competent” to handle the problem. Society has no organized plan, so the burden falls back on “unlucky” families. We have a culture that encourages individual sovereignty with reduced birth rate in many communities, so adults may not be prepared for the unchosen duties of caregiving (compared to child bearing which is supposed to be governed by personal choices). The panel also pointed out that sometimes patients outlive their caregivers, whose health may suffer from the tremendous sacrifices; so this is indeed the next huge "public health problem" that could turn into a slow "pandemic." Medicine makes it possible for people to live longer, but not to function without the former family structures that have broken apart and dissolved away. The problem could have a big effect on the way we reinvent “moral values.” But, medically, we may be starting to turn the corner.

There are reviews of several programs on eldercare on this blog in early April 2008 (see archives).
Posted by Bill Boushka at 8:36 PM