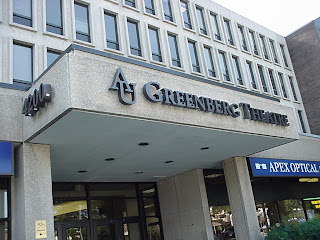 There is footage of Nicky as a baby, whom the family saw as “on a throne”. The pediatrician thought he would be autistic or severely disabled. But Nicky eventually learned to talk, and developed focused intellectual skills (like perpetual calendar calculations). He grew up in New York City, living at home, celebrating his 21st birthday at the beginning of the film. His father says that his brain cannot process body language or subjective interpersonal communication. Therefore he enjoys “acting out.” He sits at home and enjoys his world of soap operas, which he says exude romance, glamour, and plot, and some sort of moral lessons. (He doesn’t mention “Days of our Lives” with all of Sami’s troubles but he probably should have.)

But then he has to deal with “my place in the world of work.” He gets a job in the mailroom of a prestigious media firm. He makes some kind of comment that, judging from the people, he feels like the place is more like Harlem than Park Avenue (if he were in Amsterdam, with a similarly named area, that might be all right, literally speaking, but not in New York – again, the point, he does not respect “social context”). Then he asks his boss for time to go home for a moment, and he gets fired. Three years later he tries another job, and gets reprimanded for looking at other people’s mail.

His behavior seems gratuitous, perhaps offensive. It would seem that he does not take enough responsibility to be able to live on his own, as an “independent man.” But, his sister (the filmmaker) feels that this may our, the public’s, moral value judgment based on public values. It really does not seem real to Nicky.

The film presents only one case of Asperger’s. Some people with Asperger’s live very well, working in intellectual pursuits like computers, but simply seem inflexible in social connections with people. They may be able to interact with people on their own terms, if they follow certain patterns that they have learned well. Some do not marry, but some do.
In a few cases, some become very accomplished in some intellectual or artistic area. The converse is not always true. Some great composers and concert performers were very eccentric, but by no means all. Perhaps Beethoven might have been considered to have Asperger’s. I have a review of a book by another person with Asperger’s, John Elder Robinson, on the book review blog in Oct 2007, here.

I have been told by other friends (as I am in my 60s) that I have “it.” One filmmaker told me that at a Friday’s based on lack of body language. My behavior as an early teen was often inappropriate sometimes (in a few instances, particularly), but I learned and “outgrew” some of it. But as a young adult, particularly early in my working life, I committed a few social gaffes that I cringe at now (particularly a few in the 1970s), and one or two of them were psychologically similar to Nicky’s in the film. I would not commit these today. I worked in information technology for 31 years (1970-2001) with no significant periods of unemployment and lived in four different cities.

There is an issue with introversion and self-focus, and emotional diffidence or aloofness in situations where others expect emotional connection and preferential empathy (especially family members). This might happen on the mild end of Asperger’s, or might be thought of as “schizoid personality” (a term that sounds scarier than it is), or narcissism. These will mix into moral issues, in some people’s minds.

You know, they just said on Larry King Live, that democratic vice-presidential choice Joe Biden tends to “commit gaffes.” Oh, well. He is no Lloyd Bensen.
Posted by Bill Boushka at 6:54 PM