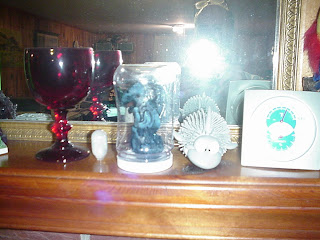 Tonight, Sept. 16, ABC Primetime broadcast a 90 minute report “UFOs: Seeing Is Believing” with David Muir as the host; directed by Rudy Bednar. Muir stood in the Very Large Array in New Mexico, which I drove past in 1984. The Array also appeared in the 1997 film “Contact” based on the Carl Sagan novel.

The show started with the light show over Stephenville, TX in January 2008. The lights were shown as silently appearing and rearranging themselves in various patterns, and then going out. Sometimes, they coalesced into light tubes.

The show moved on to discuss the Pheonix sightings, that could have been flares.

It then showed the results of the latest Mars probe, with the finding of water ice near the north pole (as well as dry ice).

The show then discussed the USAF Project Blue Book, which I examined one time at the National Archives. It traced the origin of SETI back in 1960. Theoretically, a civilization up to 25 light years away could have responded by now if it intercepted the signal. A new Large Array is being built in northern California, probably in the basin country north of Mt. Shasta, an area that I visited in 1975 (for example, the Tulelake petroglyphs) and the “glass mountains”.

The show gave an account of a sighting at a military base NE of London. Military officers reported a red object with a black center that would exploded into white lights like a firework does, and even left traces in the ground.

The later part of the show went back to the original sighting of UFOs by pilot Kenneth Arnold near Mount Rainier, Washington on June 24, 1947.

Then the show presented Jesse Marcel, who found metallic foil like remains of the crash in Roswell, NM in 1947. There was clip of the mid 1990s alien autopsy hoax film.

The last part of the show presented “Close Encounters of the Third Kind”, as in the title of the 1978 Steven Spielberg film. One man told of being abducted and being given delicate medical examinations by several beings, and a pregnant women claimed that a baby was taken.

The ABC website link for the show is called “Lights in the Sky: Looking for New Evidence of Life Outside Earth,” by Lynn Levy and Joanna Weiner, link here.

One other thing: in May 2000, while driving between Phoenix and Yuma, I lost over an hour at a rest stop in the desert. Don’t know what happened, but I was alone. When I came to, it was about 3:10 PM (just as in the film).

The picture includes a pickled alien fetus purchased in Roswell in 1998. Next to it is one of Stephen King's Langoliers.
Posted by Bill Boushka at 8:29 PM