Three networks have "Stand Up for Cancer" hour 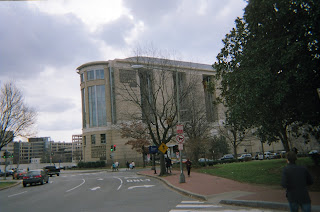 Today, all three “major” networks (NBC, ABC, CBS) held a one hour benefit “Stand Up to Cancer” with NBC’s page for it here.
The website for the organization is this link, with phone numbers 888-90S-TAND or 888-907-8263 for donations. The AOL television link is here.

The event was held in Soldier Field in Chicago (with Lance Armstrong hosting) and at the Kodak Theater in Los Angeles(usually the site for the Oscars). Performers included violinist Joshua Bell and singer Josh Groban. Meryl Streep appeared and made an analogy with the March of Dimes to cure polio, and said no one which dime led to the breakthrough and the first vaccine.

Cancer is really about 250 different diseases, comprising carcinomas, sarcomas, lyphomas, and leukemias. Many chemotherapy drugs work against many tumors, and combinations work better with fewer side effects than do individual drugs. Most malignancies have to do with the inability of a cell to stop reproducing. An overall “cure for cancer” would have to prevent this in every kind of cancer. Yet, in the 1990s, there was talk (as on the Gabe Mirkin radio show in the DC area) on a unified approach to stop cell “immortality.” The program discussed using nanotechnology (as in “Jake 2.0”) to find individual tumor cells.

The show did a comical “Simpsons” take on colonoscopy, and a fake prostate exam with a real actor. The show described a number of heroic case histories with experimental bone marrow and stem cell transplants.

The show gave alarming statistics of the probability of anyone getting cancer in a lifetime (1 in 2 for men, 1 in 3 for women). The ability of medicine to greatly extend life and attempt novel cures is amazing. But, as with the general issue of extending life spans for the aged, the ability to do so may depend on the available support of other family members (caregiving and even transplantation marrow), which is getting testy in an era of smaller families, fewer children, separate lives, and hyperindividualism.

Lance Armstrong, the host, had a long battle with metastatic testicular cancer when he was in his 20s. (Here is his own site regarding his own struggle.) He was coughing up blood before he sought medical attention. On the other hand, many elderly men have slow-growing prostate cancer, and they may be as well off with no treatment as with intervention. It is not clear that aggressive and disabling treatment always benefits everyone, especially seniors.

At 9 PM, NBC had an NFL season launch at Columbus Circle in New York (waiting for a tropical storm), hosted by Zachary Levi (of “Chuck” – he buttoned up during the show), with a lively performance by Keith Urban. Trouble is, the season actually opened last night, with the Superbowl champs New York Giants (actually New Jersey Giants) beating the punchless Redskins 16-7 in the Meadowlands. Was this a ("trademarked") NFL party or a New York sports teams party?

NBC Nightly News announced that the telethon has raised over $100 million so far.
Posted by Bill Boushka at 7:49 PM