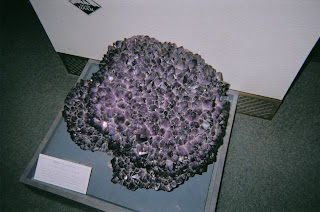 The first part of the show demonstrated “growing diamonds”. The idea is to place a diamond wafer under extremely high pressure and heat in a “reducing atmosphere” filled with hydrocarbons (maybe like the conditions on some extrasolar planets, some of which are thought to covered with diamond in a carbon monoxide atmosphere). The carbon “precipitates” as more diamond, which has more atoms per unit volume than any other crystal.

If it’s possible to make diamonds with consistent cut, it could be possible to replace silicon in semiconductors with diamonds, leading to a new generation of chips for computers in a few years. The idea of diamond chips may be tried on French high speed trains soon.

The show also covered the investigation of the anthrax attacks in the fall of 2001, shortly after 9/11. Genetic matching work in excruciating detail was necessary to identify the Ames strain, and eventually leading to Bruce Ivins (after one notorious false lead causing lawsuits against the FBI and some media).

Look at the site “Right Wing Nuthouse” with an article, 8/1/2008, for some troubling questions, here.

The PBS Nova link is here.
Posted by Bill Boushka at 10:41 AM