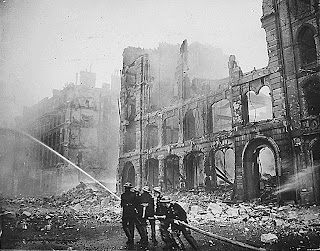 On March 31, PBS Maryland Public Television re-aired Louise Osmand’s Channel 4 film (2005) “The Blitz: London’s Longest Night”, giving a chronicle of the night of December 29, 1940, when about 138 German bombers targeted The City of London, causing over one square mile to be destroyed with 24000 incendiaries. The link for the documentary is here.  The main narrator is Dilly Barrow.

The film reenacts the events for several families and individuals, some of whom volunteered to watch the St. Paul Cathedral or the other areas as around Fleet Street, where London’s press was located. The Germans apparently turned on civilians in London after the Brits had struck Berlin earlier in 1940 as part of the Battle of Britain.

There is a lot of discussion of the interior construction of the Cathedral (and the history going back to Christopher Wren, also significant for the College of William and Mary in the US), and its feared vulnerability, and the effort that it took to spare it, but it stood tall during the raids.