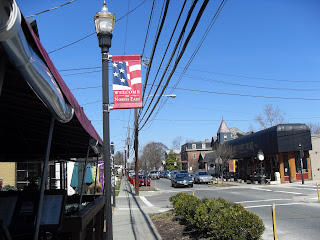 “There’s going to be another blackout.”

Maybe that’s enough to summarize the restart of the ABC miniseries “Flash Forward” with its two-hour intermission premier. That’s Mark’s (Joseph Fiennes) strained recreation of his flash forward. There’s the stuff about Red Panda that the fibbies say didn’t start in Somalia until 1998 (five years after Clinton’s fiasco), not in 1991 when the “towers of Ned” were found.

But the most intriguing part is probably the second half, where the episode in Commerica Park is recreated. We learn that the “survivor” was given “The Ring” to wear, literally from Toiken.

Somehow, physicists need to figure out how to protect consciousness from singularities in space time.

The physics mini-prof Simon Campos (German actor Dominic Monaghan) loses a finger in an extreme rendition, but he is too young to have lost more, yet – for those who watch closely. The scenes in both Toronto and Detroit (with a plane flying over, weeks before Christmas Day) are interesting.

Here’s a distantly related YouTube by MrYahay, “a scientific explanation of God”.

The script of tonight’s re-premier of referred to the “knowledge of good and evil” – sought by physicists, and the idea that the Flash Forward wasn’t about any one of us, it was about all of us (as explained in the “Parable of the High Rise Window Washer”). Rick Warren had always said “it isn’t about you.”
Posted by Bill Boushka at 8:06 PM