FX "Justified" starts with "Fire in the Hole": a US Marshall hunts extremists in strip-mine country 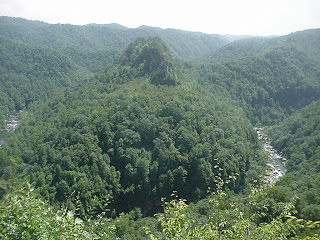 Tuesday March 16 FX Networks premiered “Justified” with the episode “Fire in the Hole”. US Marshall Raylen Givins (Timothy Olyphant, not quite the same as Tommy Lee Jones) goes back to his native Harlan County KY to counter an Aryan nation extremist group.

The group resembles those from Idaho as portrayed in the media. There is plenty of skinhead and tattoo visible, hardly resembling our idea of manliness.

The main site for the show is here. The videos here require "unverified" age confirmation to view.

There is also a “scavenger hunt” "Justified the Pursuit" contest here.

The name of the series reminds me of one of Justin Timberlake’s CD’s (an accident to be sure). But the word here refers to the use of weapons in law enforcement, in self-defense or against those resisting arrest.

The script makes reference to strip-mining and mountaintop removal. Eastern Kentucky is one of the most seriously damaged areas by strip-mining for coal in the nation.