ABC will cancel "FlashForward" -- it held my interest! 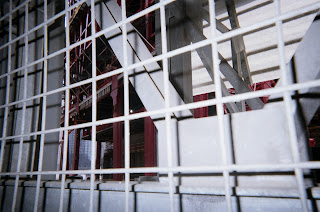 Recently multiple media outlets announced that ABC had cancelled “Flash Forward” for the 2010-2011 season. The season finale (“Future Shock”) will occur May 27, and apparently has been rewritten to bring the series to a close.

The May 20 episode tonight was called “Countdown” and showed us some of Simon’s formula. There was the bizarre concept of a “tachyon wipe”, which seems to refer to a theorem from the 1970s that information (but not matter and energy) can transcend the speed of light and emerge from a black hole into a new universe. The idea had been promoted in a 1978 book by Jeffrey Mishlove, “The Roots of Consciousness”.

In the closing scene of the episode, Mark Benford (Joseph Fiennes) is walking through a “FlashForward Day” celebration in LA, which looks like New Years Eve for 2000 in Kathryn Bigelow’s movie “Strange Days,” a similarly styled film where brother Ralph Fiennes plays a cop who watches specially coded disks of people’s memories of crimes – a similar concept. Mark takes a drink from a stranger, a mistake, and gets into a brawl in a bar. He has been told that in all visions he will die soon.

The media reports that ratings for the show had dropped with the Spring return. Critics didn’t like Joseph’s acting.

I think about other series. “Smallville” was very strong the first three seasons but then got silly. (They should have had Clark go to college and stay.) “Everwood” held my interest until Ephram blew off the Julliard audition.

FlashForward is a great concept.  (I think there should be another blackout.) My life began to drift after 2000 (especially after 9/11) because I had no “flash forward” as to what my life should be like in my 60s. I wound up having to pay my dues.

NBC will cancel the original "Law and Order" but apparently SVU will continue.
Posted by Bill Boushka at 7:09 PM