PBS Nature: "Crash: A Tale of Two Species": the horseshoe crab and the red knot shorebird 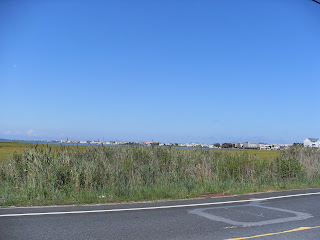 On Sunday May 16 PBS Nature showed the documentary film “Crash: A Tale of Two Species: The Story of an Ancient Invertebrate and a Little Shorebird” (one hour) by Allison Argo, with link (web url) here.

The invertebrate is the horseshoe crab, which is actually Chelicerata rather than crustaceans (true crabs or lobsters), and which has survived hundreds of millions of years and mass extinctions. The little eggs become food for the red knot, a little shorebird with one of the longest migration patterns in the world, and which biologists study in Patagonia. The documentary said that the horseshoe crabs are biologically more like spiders (arachnids) than true crabs or lobsters.  I guess the horseshoe crab would make subject fodder for a question on a high school biology test (maybe even the SOL's).

The horseshoe crab is native to the Chesapeake Bay and the Atlantic shore, and crabs are taken for their “blue blood” which is used to test many pharmaceuticals for impurities and bacteria (because of its copper content – and copper transports oxygen (in hemocyanin) in some invertebrates, although not as effectively as iron does in mammals; here’s a link on the blue blood in medicine. ). The crabs are returned to the Bay (Freudian slip from my Army days – “back to the bay” or BTTB) but some are lot, and the horseshoe population also drops because of beachfront development.

It’s odd to call a nature film “crash” when that word was used to title two famous (and unrelated) independent films.