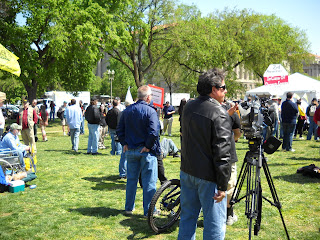 On Friday May 7, PBS premiered its news magazine to follow the Bill Moyers Journal, “Need to Know”. The descriptive website is here. The hosts are Jon Meacham and Allison Stewart.

The name of the show is not the “Need to Know” associated with handling classified information.

The hosts explained that the point of the show is to provide context on the news, to “turn up the light”, or, as I say, “connect the dots.”

One of the most interesting segments was about the loosening of firearms laws in many states, especially Virginia, where Ed Levine and his family were interviewed. The ability to carry both public and concealed weapons, and the ability to buy the weapons from private sellers without background checks in some cases, was discussed. New York Mayor Mike Bloomberg, himself a Republican, argued that federal gun laws should be enforced. The Virginia Citizens Defense League (link) was presented.

One NRA spokesperson argued that 9/11 might not have happened had passengers been allowed to be armed.

Another segment featured an interview with former president Bill Clinton at his office in Harlem; he talked about the efforts to provide rebuilding of commerce in Haiti. He also mentioned that the Internet had only 50 sites the day he was inaugurated, and he discussed the “amotization” of information today compared to a half century ago, when there were three major networks who could take their time with detailed stories from correspondents, resulting in a stable “fact base”.

The last segment discussed the evolution of the use of contraceptives back in the 1960s (Griswold v. Connecticut), and in the beginning they were used mostly by married women.
Posted by Bill Boushka at 7:41 PM