CNN: "Gary and Tony Have a Baby": documentary about gay male parents and surrogate fatherhood 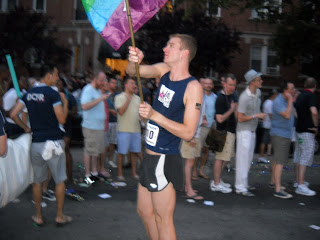 On Thursday June 24 at 8 PM, CNN aired the one-hour documentary “Gary and Tony Have a Baby” with Soledad O’Brien narrating.

The gay couple (Tony Brown and Gary Spino) uses one of three companies in the US that helps match gay couples up with surrogate mothers to have one man’s baby (here it’s Gary) by artificial insemination.  Eventually the mother has the baby boy by Cesearean and then learns she can't have more children. Gary becomes a legal parent, and Tom must file for adoption.  But before that, the couple has to file a "friendly suit" with the mother present to gain formal custody.

The surrogate mother did not want to be known in her rural community (even though it seems that the mother was somewhat handpicked for ancestral issues). The film covered the ultra-sensitive topic of intimidation. Both men were from small towns but were comfortable living as gay parents in New York. The film showed New York State’s recent vote on gay marriage, which was still defeated.

A different woman (from Florida) actually provides the ova (for $8000),which is implanted into the surrogate mother. That woman's employer didn't want her last name revealed to the press (or on the Internet) if she was going to donate eggs to a gay couple. Would you believe that?

The first preview CNN link for the show seems to be here, titled “Gay Couples as Parents?”

CNN has a YouTube video from Larry King Live with no embedding here.

There is a book about a Maryland gay couple adopting a boy back from 1995 called “Getting Simon” by Kenneth D. Morgen.

Picture: from DC Pride.
Posted by Bill Boushka at 7:15 PM