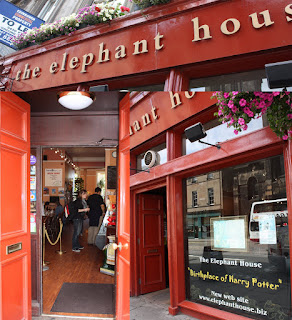 On Sunday June 6, NBC presented a half-hour update on the construction of the theme park “The Wizarding World of Harry Potter” at Universal’s Islands of Adventure.

The Harry Potter films franchise belongs to Warner Brothers, which does not own a theme park. So the choices are Disney and Universal, both in Orlando, FL.

But Steven Spielberg and James Cameron have both worked as consultants designing attractions in the park. (I suspect that some day Disney or Universal will build a “Pandora” attraction. A model of Titan might be more appropriate.)

Daniel Radcliffe appears with many comments.

Others designing the park with its attractions and rides said that the most important aspect of the park was the attention to detail.

Attractions Magazine offers this YouTube video as of May, 2010.

Wikipedia attribution link for the Elephant House in Edinburgh, where J.K.Rowling wrote much of her output in the beginning. I visited that city in November 1982.
Posted by Bill Boushka at 7:16 PM