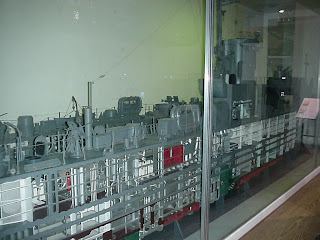 "NCIS" (Naval Criminal Investigative Service) airs on CBS and re-airs on USA, and it sometimes brings up some interesting issues.


The NCIS has civilian employees investigating military personnel, here in Navy whites. It’s rather obvious, as Randy Shilts pointed out in “Conduct Unbecoming”, that this state of affairs can put civilians who are supposed to be protected from anti-gay discrimination investigating violations of “don’t ask don’t tell”. That’s not the topic of the episode tonight on USA, “Untouchable”, but it’s curious.

In the episode, a female officer cryptographer is found shot, creating a mystery similar to a couple of killings of highly cleared personnel around Washington DC in late 2008. The show takes a tongue-in-cheek, almost “Chuck-like” attitude toward a serious and dangerous subject. The script deals with the very real problem that intelligence services like (or practically have) to hire loners (schizoid personalities who shun real real relationships) that they don’t trust (hence the double agent problem); and it presents a female (Naval officer) roommate who is too introverted to even be suspected of lesbianism under DADT. Here the plot includes an inside job, a mole, the Venezuelan commie Hugo Chavez, probably Russian nationalism (maybe commie-capitalism more like that of China), and the idea that a suspected assassin could have diplomatic immunity. Who knows if such elements may have really existed in the real-life 2008 incidents in suburban Maryland. There is also a great ploy on the 1987 film “No Way Out” (Roger Donaldson, Orion Pictures). There’s a great gratuitous scene with (character Jetrho Ginns) the hairy-chested Mark Harmon shirtless, changing in the office and being chased.

The real NCIS has this website.
The CBS site for the show is here.
CBS Youtube trailer for Season 7:

Hi Bill - would you have any interest in info on a new show called Neighbors from Hell. Let me know! Best, ang