WJLA in DC: The Inauguration of Stephen Strasburg (right down The Middle) 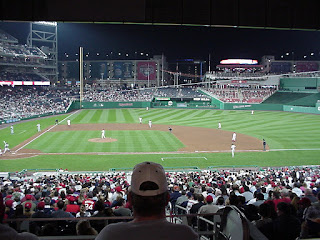 ABC’s Washington affiliate WJLA (actually in Arlington) replaced an episode of “The Middle” tonight with a half-hour “The Inauguration of Stephen Strasburg”, about the sensational new Washington Nationals rookie pitcher, who won his first game Tuesday night against Pittsburgh. They mentioned his recent marriage and Strasburg made some kind of metaphor of the game to a wedding. (They could have called it a “coronation”, with pie faces, and Mozart’s 26th Piano Concert, rewritten.)


Then a second half-hour episode of “The Middle” came on, and showed the parents deciding to cut cable TV to save the family money (that sounds like they had experienced a Suze Orman smackdown) The parents also want more “family time” to socialize the kids, who can prove that TV and cable Internet are necessary for keeping up. This brings to mind a recent episode of Oprah where a family gave up all electronics for a week and learned to give hugs again.

Stephen Strasburg appeared on David Letterman on CBS in a video spoof of ten jokes ("Top Ten Little Known Facts about Stephen Strasburg"), including one involing using laser hair removal on his back (to spend his signing bonus with the Nationals). (Warning: Unlike the case with the strips in "41 Year Old Virgin" or what was done to Ashton Kutcher ["aplusk"] for "Killers", it's permanent.)  Strasburg has a 91 mph changeup.

Remember, David Letterman belongs to the Zipper Club.  He was dragged involuntarily into emergency coronary bypass surgery on Friday afternoon in January 2000; the hospital already had an OR for him.  The Esquire had fun with this later.
Posted by Bill Boushka at 8:28 PM