"Covert Affairs", spoofy series about life in the CIA on USA, brings back a geeky Christopher Gorham (from Jake 2.0) 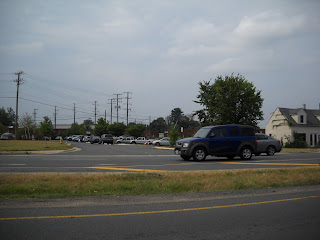 USA Networks aired a pilot (75 minutes) last night, in competition with the All Star Game, of a new series “Covert Affairs”, about a young woman Annie Walker (Piper Perabo) joining the CIA. One interesting aspect of her resume is her fluency in many languages (often an ability that would have made her a desirable recruit for the military or service academies). Her final polygraph asks if she can keep her professional and personal lives apart – an oxymoron according to both Facebook and probably the terms of becoming an agent. Once at work, she meets nice techie guy Auggie Anderson (Christopher Gorham, in a role reminiscent of “Jake 2.0” on UPN). Auggies was blinded in a previous employment accident, and Gorham has to act the part. His computer terminals display output in Braille.

They set up a caper with a Russian spy (familiar) in a hotel room, have a shootout, and later visit a morgue, to get caught by the cops.

The show has a kind of tongue-in-cheek and snazzy look and soundtrack, almost comical. This is not the conscience-changing concept of something like USA’s former hit “The 4400”.

The episode was directed by Tim Matheson.

The USA site for the show is here.

Picture: see the train?
Posted by Bill Boushka at 5:56 AM