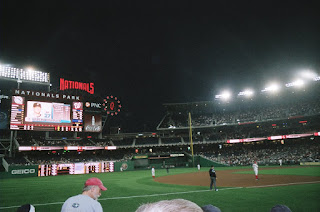 Recently, the UPN Network re-aired a particular episode (2005) of “House M.D.” named “Sports Medicine”, which plays on the controversy about steroids in major league baseball.


A pitcher (Scott Foley) has suddenly developed brittle bones and his upper arm humerus bone has a bad fracture. Then he develops other life-threatening symptoms. The doctors are suspicious of steroid use, and at one point Gregory House (Hugh Laurie) “exposes” him to show evidence of steroid use. It turns out that at one time in the minors the coach slipped him an usual secret steroid, increasing his muscle mass. But later they figure out he was trying to kill himself with digitalis.

The show presents the pitcher as a budding star who fell. The episode was apparently aired in a marathon of episodes from the show, but it may be ironic that it aired so soon after the debut of sensation Stephen Strasburg for the Washington Nationals.
Posted by Bill Boushka at 6:44 PM