Oprah has a couple of LGBT interviews (including Kimberly Reed) 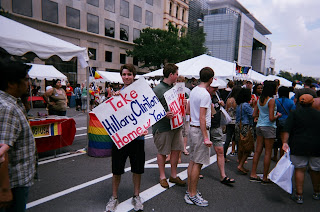 In early July 2010, Oprah has followed on to the recent gay pride celebrations with a couple of shows on LGBT topics, although these appear to be repeats of interviews last winter.

On July 6, Oprah ran an interview with lesbian Country and Western star (whose music has a Christian outlet) Cherly Wright. Her father was present. That was preceded by a discussion of the medically miraculous recovery of Bret Michels from a massive brain aneurysm, which may have had a 20% survival prospect. The link for the story is (web url) here.

Today (July 7) Oprah presents Kimberly Reed, one time high school football star, who became a female and then a lesbian. But she made a documentary about the rest of her family, “Prodigal Sons”, reviewed on the movies blog, March 12, 2010. The “other Scott Peck”, son of a Marine Corps general involved in the 1993 debate on gays in the military, had a radio talk show in 1993 where he interviewed a Navy corpsman who left, had a sex change, became a lesbian, and remained in Naval intelligence as a civilian.
Posted by Bill Boushka at 11:53 AM