PBS: "Merle Haggard: Learning to Live With Myself" 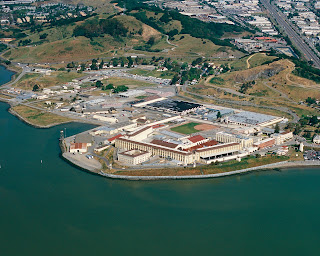 On July 21, some PBS stations carried the 80 minute documentary about a notorious guitarist and country music singer, “Merle Haggard: Learning to Live with Myself”, with main link here.  There were a number of interviews with other musicians, including Robert Duvall, John Fogerty, Billy Gibbons, Kris Kristofferson, Keith Richards, Tanya Tucker, Don Was, and Dwight Yoakam.

The early part of the film depicts rearing in the California valley, the arrival of the “Okies” from the Depression, and his delinquency, resulting eventually in some time at San Quentin prison, which was still pretty bad in 1960.

Later the film presents his outlook on life, as rather paradoxical: he was happier when he was sad; he seemed to enjoy his pain.

Haggard has recently been diagnosed with lung cancer.

Wikipedia attribution link for picture of San Quentin.
Posted by Bill Boushka at 6:42 AM