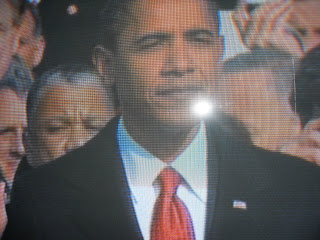 The president said that he does not tweet, but in fact he does, as I follow him on Twitter (about two a day). He said only about 10 people are on his Blackberry phone list, since the communications are so secured, and the messages are mundane. We believe he has the new Verizon smartphone.

The full episode will appear on ABC tomorrow (Friday).

Barbara Walters asked “what has been the rose, and what has been the thorn?” Remember, Walters is returning from heart valve surgery, which now can be very successful on a patient able to tolerate it.

Obama talked about the need for improvement in education, and the “resilience of the American people’ in dealing with the financial collapse, the oil spill, and even the H1N1 pandemic. He said that the American people remain optimistic.

The president also said that he tries to provide as normal a life as possible for his two daughters, who aren’t allowed to use media during the school week.